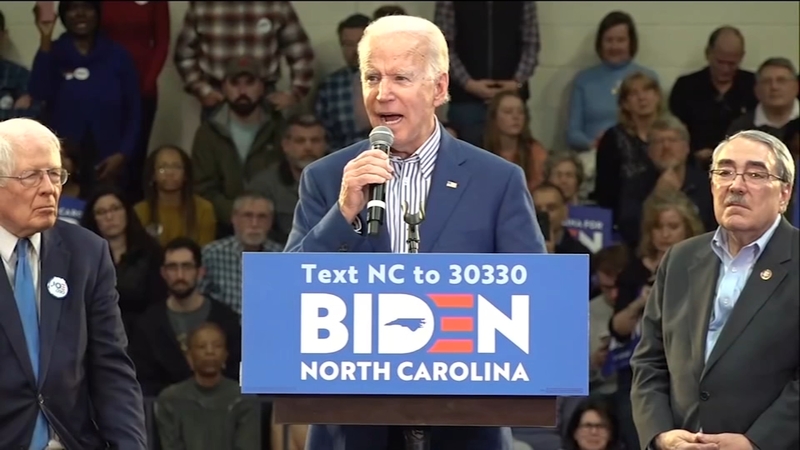 Around 7 p.m., Biden was declared the projected winner of the South Carolina primary, his first victory in three tries at the nomination.

Biden, the one-time front-runner to be the Democratic candidate for President, is banking on strong support from voters in southern states to bolster his chances against Senator Bernie Sanders, the self-described "Democratic Socialist" and champion of the party's progressive wing.

TODAY: With most eyes on #SouthCarolina, @JoeBiden takes a day trip north to @SAU_News in #Raleigh. Biden needs strong turnout in the South to remain a viable alternative versus @BernieSanders in the #DemocraticPrimary. @ABC11_WTVD @ABC @ABCPolitics #ncpol #Vote2020 pic.twitter.com/D5HWP1bTv9

"I feel really good about North Carolina," Biden tells ABC11 in a one-on-one interview before his rally at St. Augustine's University. "North Carolina is a state of hard-working people, a lot of middle class and working-class people. That's where I come from, that's what I'm talking about, and that's why I think we'll do well here."

Biden, whose late son Beau served in the military, minces no words when it comes to President Donald Trump's role as Commander in Chief, despite a significant a rise in military spending and strikes killing the leader of ISIS and the Iranian Revolutionary Guard.

"My counter-argument is he doesn't treat our troops well," Biden explains to ABC11. "There were over one hundred people with traumatic brain injuries (after air strikes against Al-Asad Air Force Base in Iraq). What did he say to those guys? He said get over it basically, they're 'headaches.' The way he talks to our commanders, the way he talks to the military, the way he talks down to them. No president has ever dealt with the military this way.

The Tar Heel State's 122 delegates is a hefty haul compared to those of South Carolina, Iowa and New Hampshire. More than a dozen other states are holding primaries on Super Tuesday, with 1,357 out of 3,979 delegates up for grabs.

Here's the full transcript of our interview with Vice President Biden:

JONAH KAPLAN: Let's start first by looking back at 2016. In that election, North Carolina voters supported President Donald Trump and Senator Richard Burr - both Republicans - but they also went for Roy Cooper for Governor and Josh Stein for Attorney General - both Democrats. Why are you the best candidate to turn North Carolina a deeper shade of blue?

VICE PRESIDENT JOE BIDEN: Look, North Carolina is a state of hard-working people, a lot of middle class and working-class people. I think for a while in 2016 we forgot to talk about those folks. But (Governor Roy) Cooper didn't forget to talk about it and the Attorney General (Josh Stein) didn't forget to talk about it. So I feel really good about North Carolina. I feel good about the issues. Look, they're concerned about their health care, the safety of their kids in school, access to education. They're concerned about the things, the bread and butter things, are talked about at everybody's kitchen table. That's where I come from, that's what I'm talking about, and that's why I think we'll do well here.

JK: You mention the kitchen table, and in fact in our own research at ABC11, our viewers - 67% of them - worry about personal debt, and 60% say they worry about making ends meet. What is your plan to fix those issues and to relieve some of the anxiety of our viewers?

JB: A whole range of things. First of all, too many families are sitting at the kitchen table this morning saying, 'I know the tires are bald but we don't have the money. We're going to have to ride another 5,000 miles on those tires.' All this talk about how great the economy is. Well, the economy is growing - short of what's happening with the Coronavirus and what this President is doing - the economy is growing but middle-class wages are falling. Middle-class people and working-class people have no way up. There's a study done by Brookings (Institution) that if in fact, you have a bill for $400 in a month that you didn't anticipate, you'd have to borrow the money or you'd have to go sell something. So what I do is I focus on the things that make a difference for people: I make sure that they are able to organize and have jobs. I make sure they're in a position where there are minimum wages that people are going to be able to make, $15 an hour. That's not enough to get them to deal with a $400 bill, but I also make sure they're going to be in a position where they can afford their health care, they can afford to send their kid to school. And by us reducing the prices of schools, by us subsidizing what they do in terms of health care. Look, to make it to the middle class is about having just a little bit of security, a little bit a certainty, and the middle class, as I said, is getting clobbered. You know we here about how the tax cuts are helping all these people - not a lot of middle-class folks or working-class folks. So you have a majority of people thinking now their child will not be able to have the standard of living they had. That's the first time that's ever happened in modern American history. And so I focus on workers, I focus on opportunity, I focus on education, I focus on health care, I focus on safety in the streets. They're the things I focus on.

JK: You mention security, and I want to segue into national security because North Carolina is also home to several military posts. We have Fort Bragg, we have Camp Lejeune and we have Seymour Johnson Air Force Base. Many of the President's supporters will talk about his strong narrative when it comes to the military: he talks about rebuilding the military, about crippling ISIS. He took out their leader, (Abu Bakr) al-Baghdadi, and also the bold strike to kill the Iranian Revolutionary Guard head (Qasem) Soleimani. What is your counter-argument to that and why would you make a better Commander in Chief?

JB: My counter-argument is he doesn't treat our troops well. This is a guy who when he went after Iran, walking out of that deal, they hailed rockets down on Al-Asad Air Force Base in Iraq, where my son (Beau) had been. You know what (Trump) said? There were over one hundred people with traumatic brain injuries. What did he say to those guys? He said get over it basically, they're 'headaches.' The way he talks to our commanders, the way he talks to the military, the way he talks down to them. No president has ever dealt with the military this way. The way he abandoned them, didn't listen to our military when they pulled troops out of the area and along the Turkish border and ending up in a war that's going on now. We abandoned our bases at his request to get away. Who's occupying it now? It's being occupied by Russia and there's a war going on beginning to start there. What's he doing? He has no plan. And he's poked his finger in the eye of NATO every time. He treats NATO like a protection racket. This guy has been terrible for the military.
Report a correction or typo
Related topics:
politicsraleighpolitical insidernc2020politicspolitical insider
Copyright © 2022 WTVD-TV. All Rights Reserved.
TOP STORIES
Toddler and man killed in Raleigh apartment shooting, arrest made
NC company to expand U.S. monkeypox testing capacity
Dangerously hot day to give way to stormy evening
Gas prices decline in Raleigh but experts worry about meaning of dip
Sticker shock for young would-be renters as apartment leases spike
Highland Park parade shooting suspect bought 5 weapons despite threats
Carlos Santana collapses during Michigan concert
Show More
Man dies hours after shooting at Raleigh gas station
Grandfather of woman shot by Fayetteville police searches for justice
What to know if your flight gets canceled or delayed
Raleigh City Council adopts 'social districts' ordinance
Raleigh woman recovering, arrest made in San Diego shooting
More TOP STORIES News