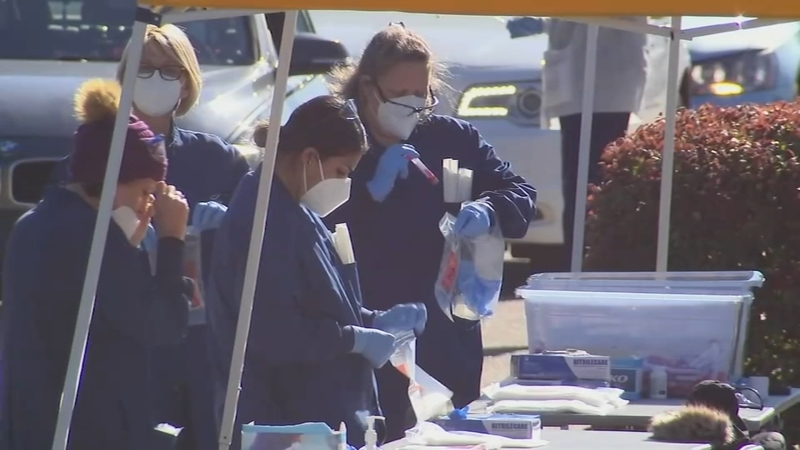 Why counties are scaling back 'free' COVID-19 test sites

The Wake County Health Department announced that July 29 will be the last day of testing at its drive-thru locations.

Wayne County officials announced this week that community testing will no longer be offered by the health department on Aug. 1.

Durham County is also losing one of its testing vendors at the end of the month.

The decisions come as COVID-19 continues to spread with at least 24,000 North Carolinians testing positive this past week and a fourth of the state considered "high-risk."

Many officials cited dwindling demand and high costs of outdoor testing sites for the decision to scale back.

"Folks are using at-home tests or they just don't have the volume to sustain that level of staffing and manpower to stand up at a site," said Durham County health director Rodney Jenkins.

Wake County has spent $131 million on testing since 2020. The county uses four vendors to assist with testing. Ninety-five percent of the county's testing funds have gone to Radeas LLC.

Wake County officials said to continue drive-thru testing for the next month will require the county to use $2 million of local taxpayer funds.

The Durham County Health Department said its testing is funded entirely by the state. Through its vendor, OptumServe, the county has administered nearly 92,000 tests since the fall of 2020. Monthly testing has ticked up slightly since February, but the county is still administering about 14,000 fewer tests a month than in December and January.

Cumberland County Health Director Jennifer Green said the county has spent more than $2 million on non-COVID vaccine efforts, including testing and contact tracing. She said her department is having conversations about what is the most efficient and economical way to provide testing to residents.

"It's everything from gloves to masks to the test kit itself to making sure that we have security on-site so that people are safe when they're getting a test," explained Cumberland County health director Jennifer Green. "So there's a lot of costs just in addition to just the test itself.

"Like the other counties we're in this process where we're doing an assessment of the resources that we're spending on these test sites and to figure out what's the right size for that based on demand at each of the test sites, what's the time and the day that's appropriate and the amount of test sites that we have? We want to make sure that we're being good stewards of what's available," Green added.

Across the state, the North Carolina Department of Health and Human Services has paid $270.4 million for COVID-19 tests. The department said that number is only for tests administered through February so the total is likely much higher.

During that time, the state has worked with 14 vendors to administer 2.3 million COVID-19 tests. Each test averages around $116.

Without federal funds, barriers such as cost and access may have prevented many from getting tested and ultimately detecting the virus and stopping the spread of it.

Without insurance, at-home tests can cost as little as $10, but those options weren't always available. PCR tests out of pocket can add up to hundreds of dollars.

"Testing has been a key part of our strategy all along and really important for detecting COVID-19 early," Kansagra said.

But as options for at-home testing have increased in recent months, drive-thru testing sites have seen a decline in patients.

Between March and June, the state averaged around 43,000 tests a month; 85% fewer than the demand from November to January.

While some of the traditional drive-thru and mass sites are decreasing, many free testing options remain.

"I've heard that other counties are shuttering some of their sites in hopes of being able to kind of convert it to at-home testing distribution sites, that's something that we're looking at here in Durham, something that we've done previously in partnership with the library and volunteer fire departments. So you know, either way as a method we're going to ensure that our residents are able to have access to testing," Jenkins explained.

Green said Cumberland County is also looking at transitioning to at-home testing distributions but its current contracts extend throughout the summer.

"We launched free rapid testing here at the health department and I anticipate that will stay the case going forward at least for the near future. But we might shift what that looks like differently. So maybe fewer people on the ground doing testing but more at-home test kits," she said.