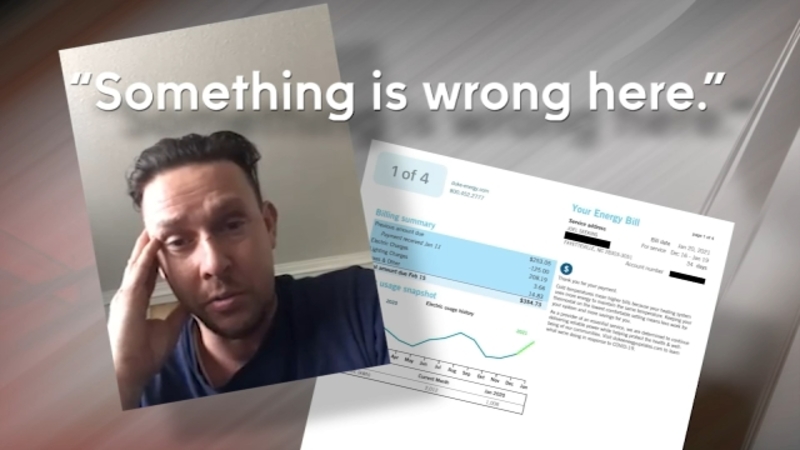 "I want answers!" That's what Troubleshooter Diane Wilson continues to hear from frustrated consumers when it comes to their power bills.

Dozens of complaints have flooded in from customers about unusually high power bills, some double, triple of what they were in December.

Joel Seekins, a Fayetteville resident, said his Duke Energy bill from December to January more than doubled. He says he reached out to Duke Energy.

"They sat it was due to the cold and Christmas lights. I have a fireplace. It was a mild December," he said. "I do not celebrate Christmas, hence no light. I do laundry once a week using cold water and hang clothes on the line. HVAC is off. I have an indoor water heater and it is wrapped with attic insulation and set at 120 degrees. I have winterized my home. Something is wrong here."

Seekins is not alone with the sticker shock when it comes to his electric bill. Sanford homeowner Kristen Thomas' says her Central Electric Membership Corporation bill is typically around $200 a month, but the most recent bill jumped to $395.

"My husband was immediately like, 'You guys better not touch the thermostats, don't leave any lights on,' and you know we were like, 'we don't touch anything.'" Thomas says she reached out to her power company.

"The first thing we were told is we must have something wrong with our unit," she said.

She says there is nothing wrong with her HVAC unit and they keep their thermostat the same temperature so it's hard to understand the higher bill.

This week alone, the Troubleshooter has received more than 100 emails from viewers with similar stories.

One Sanford homeowner's bill jumped more than $100 from month to month.

Another Central Electric Membership Corporation customer emailed: "My electric bill went from $290 to $433 and there is no way that's possible. This seems to be an issue for most in my area. Even in the summer when we run our AC and our in-ground pool constantly, I've rarely had a Bill that high."

A Durham homeowner had a mortgage mess despite paying off their mortgage years ago when they discovered there was still a lien on their property.

Central Electric Membership actually has a section devoted on their website, with answers to why bills are so high.

A representative says the colder weather is the primary driver.

"When temperatures drop, more energy is needed to keep the inside of our homes warm," the representative said. "The larger the difference between the outside temperature and the thermostat setting of a home, the more energy it takes to keep it warm at the desired setting. In terms of the impact of weather, across all of our members, we show an average increase of 96% in heating degree-days due to colder temperatures from December to January bills. Heating degree-days measures the impact outside temperatures have on heating needs and energy use. It calculates the difference between the average daily temperature and 65 degrees Fahrenheit, the point which assumes no heating or cooling is needed. This allows us to compare directly the impact of weather month to month."

Another reason for a spike in bills for Central Electric members is that the December bill had what's called a wholesale power cost adjustment for all members, since 2020 power costs were lower than budgeted.

"Due to favorable wholesale power costs in 2020, we were able to return a credit of $.027 per kWh, or $27.00 for every 1,000 kWh used," representative James Taylor said. "This is important to note because while the WPCA credit has no impact on January bills, reduced December bills make the dollar difference between December and January bills seem that much more significant. The best way to look at changes between monthly bills is by comparing increases or decreases in energy use, which is impacted significantly by weather."

When it comes to Duke Energy, spokesman Jeff Brooks said: "The culprit this time of year is usage and we are going to see that's the trend for another five to six weeks as we get through the cold of winter."

But has it really been a cold January compared to last year? The ABC11 First Alert Weather team crunched the numbers and they say this January was on average 41 degrees, while January 2020 it was 46.9. Meaning this January was almost 6 colder.

When you dive deeper, our meteorologists say in Raleigh, a typical January has eight 60+ degree days, but in 2021, we only had one. By comparison, we had ten 60+ days in January 2020.

Another culprit for the higher bills is the COVID-19 pandemic.

"People are home all day, every day so their usage patterns may be different than they were a year ago at this time and that could all contribute potentially to higher electric bills," Brooks said.

Many Duke Energy customers questioned if they were paying more due to the power companies not disconnecting services and setting up payment plans for those who can't pay their bills due to financial hardship issues.

"Funds used to support assistance programs to help customers who are struggling to pay power bills come from the Duke Energy Foundation or other voluntary contributions, not from the utility or customer rates," Brooks said.

Duke Energy offers what's known as High Bill Alerts, if you sign up, you get alerts when weather may be causing your bill to trend higher than the last month.

The alert arrives before your bill so you can take steps to lower your bill.

Also if you have a smart meter, you can continue your daily usage.

"They deliver usage information every day to their online account so they can actually see the hourly and daily usage any day of the week," Brooks said. "The whole idea of both of these tools is to give you information before your bills arrives. To let you make smart energy choices to save money,"

Here are some tips to reduce your power usage:

If your bill is much more than you can handle, reach out to the power company right away. You can ask about budget billing, where they spread the payments over the entire year. Also, check utility assistance programs, there are several offered right now, that could help you pay your bills.
Report a correction or typo
Related topics:
home & gardenncenergyabc11 troubleshooterduke energybills
Copyright © 2022 WTVD-TV. All Rights Reserved.
TOP STORIES
Snow fall begins in some parts of central North Carolina
NC prepared as winter storm brings rain, snow and sleet
Schools in Wake, Durham counties to close Friday
Contact tracers' role changes as pandemic reaches new heights
Flavor District, Triangle's largest 'ghost kitchen' to open in fall
Residents in Wilson prepare for black ice and snow
LATEST: Many testing sites closed Friday because of winter storm
Show More
Reporter hit by car on live television, but continued reporting
Check your tires before -- and after -- the wintry weather
American Airlines flight diverted over maskless passenger
'We can't get any more': Stores struggle to restock shelves
Essentials to keep in your car during winter storms
More TOP STORIES News