Pandemic aside, campaigns shake up gameplan with so few undecided voters left 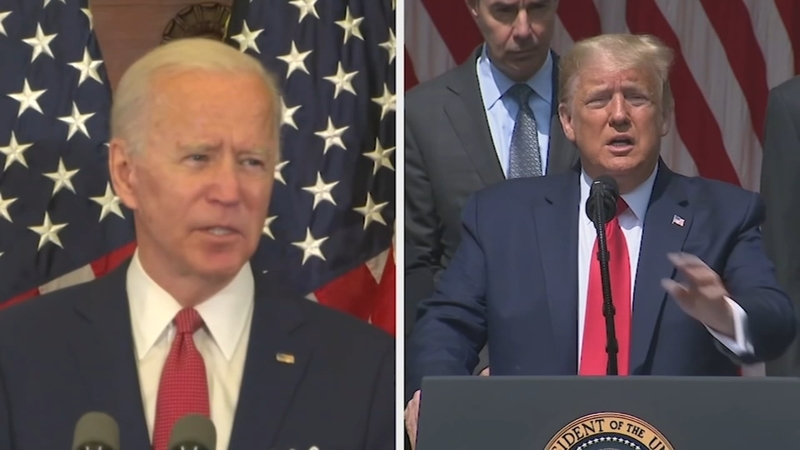 Pandemic aside, campaigns shake up gameplan with so few undecided voters left

RALEIGH, N.C. (WTVD) -- At least in sports we know the score heading into the fourth quarter.

Now eight days before Election Day, the only known fact is that a record number of voters in North Carolina and across the country have made up their minds and sent in their ballots early.

"This is not just about people who have already decided," ABC News Correspondent Linsey Davis said. "In many places these are votes already signed, sealed, delivered and cast. President Trump has been barnstorming the country. He's been burning up the campaign trail, which is important for both of them, but Biden has been under the radar and keeping a low profile. Joe Biden is in the mode of do no harm."

Davis, a key fixture on ABC News' political coverage, including the debates and elections, thinks the onus is on the president to validate Americans' concerns about health care, even if he disagrees with the premise that COVID-19 should be the top priority.

"We all are affected by the pandemic in many ways, but for the those in the hospital right now, or those infected, they're asking will this be a pre-existing condition and what does that mean for me," Davis said. "I think we need to get that answered."

Indeed, the Biden campaign has long targeted the president when it comes to COVID-19, which has spread to more than 250,000 North Carolinians and killed more than 4,000.

"As COVID recovery becomes the conversation in 2021, we must have a voice for the south and North Carolina is going to be an essential part in getting that done," Stacey Abrams, the rising Democratic star from Georgia and campaign spokeswoman, said in an interview. "Donald Trump has shown himself incapable of leadership, incapable of thinking about the needs, incapable of empathy."

Abrams, moreover, thinks the gameplan for Biden must be to reach out to a different kind of undecided voter - the people who aren't sure if it's worth going to the polls.

RELATED: Uptick in young voters could have major implications in North Carolina
"My belief is when you know you have a leader who will work for you, then you will vote because your voice matters and your vote matters."

Just days after Trump declared his support for a bill that would federally recognize the Lumbee Tribe of North Carolina, he came to speak to hundreds of supporters during a campaig

"While North Carolina leans red, it's not reliably red, and we're going to continue to work hard to earn the votes of North Carolinians," Steve Cortes, a senior strategist with the Trump campaign, said. "It's important for us to really hustle all the way to this closing tape because we believe we're going to dominate actual election day physical voting. It's probably more about getting our people generally to the polls on Election Day."

Cortes said he's confident that the president's record on the economy is what will propel voters to entrust him again.

"What the President wants us to do is take reasonable precautions and completely guard the most vulnerable people in society," Cortes said in response to concerns about the pandemic. "For the rest of society, we should be getting back towards normalcy. Take the virus seriously but don't let it dominate your lives. We don't need a magic wand but we need toughness in trade, negotiations and restrained taxes and relief on regulations. President Trump has done it once and we're confident President Trump can do it again."
Report a correction or typo
Related topics:
politicsncdonald trumpvote 2020nc2020joe biden2020 presidential electioncampaignpresident donald trumpvice president joe biden
Copyright © 2022 WTVD-TV. All Rights Reserved.
VOTE 2020
103-year-old Black woman recalls not being able to vote
Doug Emhoff becomes 1st second gentleman
1st Black, Asian woman elected VP: Watch Kamala Harris' journey
How to pronounce Kamala Harris' name and what it means
TOP STORIES
Gas prices decline in Raleigh but experts worry about meaning of dip
Sticker shock for young would-be renters as apartment leases spike
Large police presence on Shanda Drive in Raleigh
Man dies hours after shooting at Raleigh gas station
Grandfather of woman shot by Fayetteville police searches for justice
What to know if your flight gets canceled or delayed
Raleigh City Council adopts 'social districts' ordinance
Show More
Raleigh woman recovering, arrest made in San Diego shooting
Couple fined $1,500 for parking in own driveway
Creedmoor rallies around family that lost everything in house fire
DHS warned of 'heightened threat environment' before parade shooting
Parents of late NFL star Demaryius Thomas reveal he had Stage 2 CTE
More TOP STORIES News