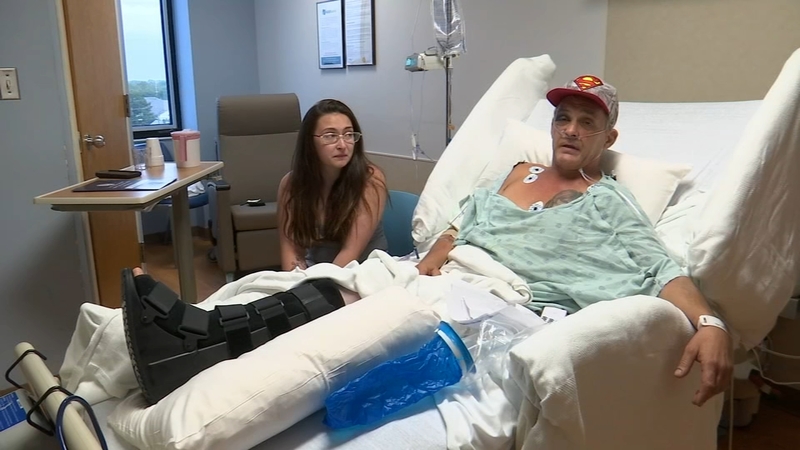 EMBED <>More Videos
FAYETTEVILLE, N.C. (WTVD) -- Herston Barnes is recovering at the hospital after he was robbed and attacked by a man driving a black SUV.

From his hospital bed with his daughter by his side, Barnes recounted a terrifying early morning encounter that started with a trip to the gas station on Rosehill Road and McArthur Blvd.

"I couldn't believe it really. Once I saw my leg facing behind me I knew I was in trouble," said Barnes. "I went to the gas station to break a $100 dollar bill."

The cashier turned him away with no change to give. Barnes walked out and approached a stranger who was sitting in a black SUV for change.

"I'm thinking he's going to grab it and give me change. He turned the wheel just enough to hit me right there. I was standing up and that's why I'm busted up so bad," said Barnes. "It's just an evil world out here."

He told ABC11 the man grabbed the cash and sped off. The force dragged him to the ground and caused him to break his left leg.

Doctors said Barnes will stay in the hospital for the next few days as he recovers from surgery -- meaning no paycheck for the 52-year-old handy man.

"I tried to trust the guy and I trusted the wrong one and got serious injuries because of it," said Barnes. "If he would have got me in the torso I probably would have been dead. That SUV was heavy. I remember it being heavy when it flopped over my leg."
Report a correction or typo
Related topics:
fayettevilletheftrobberyman attackedgas station
Copyright © 2021 WTVD-TV. All Rights Reserved.
MAN ATTACKED
Cary police say jogger accused in attacks was 'in mental health crisis'
2 people say attacks on Cary greenway may have been racially-motivated
Man attacks 69-year-old hotel manager over parking spot
'Like getting eaten alive:' Man attacked by pit bulls he helped raise
TOP STORIES
Missing 93-year-old Raleigh man found dead at Jordan Lake
What to know about the delta variant first detected in India
Look forward to bright and warm Sunday
Rash of mass shootings stirs US fears heading into summer
French President Macron says US is 'definitely' back
NOT REAL NEWS: A look at what didn't happen this week
1 killed, 2 seriously hurt in fiery Fayetteville crash: Police
Show More
Wake County 18-year-old educating NC communities hit hard by COVID
NC plantation cancels event depicting slave owners as fugitives
Knightdale police looking to ID greenway trail assault suspect
Advocates seek justice in the police killing of Andrew Brown Jr.
What mom, daughter did with 80,000 penny child support payment
More TOP STORIES News