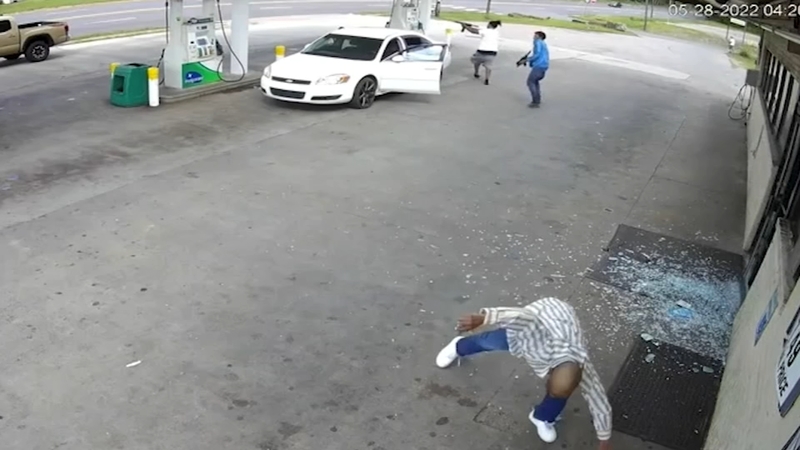 HENDERSON, N.C. (WTVD) -- Police are searching for four suspects involved in a Saturday afternoon shooting at a gas station along a heavily-traveled road in Henderson.

One suspect turned himself in Tuesday afternoon.

The incident, all captured on camera, happened around 4:20 and shows a man, with a weapon under his jacket, getting out of a vehicle and walking toward the door of Gate City Foods, a mini-mart located on-site at the BP station.

Seconds later, several shots are fired in his direction. The man begins firing back when somebody else in the vehicle opens the door and does the same.

"It stunned me. It stunned me real bad that we have that going on in our town that serious. You know we have shootings here but not like that. I've never seen anything like that," said Richard Terry, who is an owner of Eastside Barbershop a few miles down the road from the scene.

The shooting happened across the street from an apartment complex, and near other businesses.

"I really couldn't believe it when I saw it. It was I had to watch it two or three times because I was thinking about what's been going on in all these communities and the school shooting and everything, and couldn't believe that that happened in our town right up a main street," Terry said.

Turnage, of Creedmoor, turned himself in late Tuesday afternoon.

Mayor Eddie Ellington responded to the shooting, writing in part: "This is another unfortunate situation when firearms fall into the wrong hands with irresponsible and careless results."

Terry noted the shooting sparked conversation inside the barbershop.

"We were talking about how people can get guns at 18 years old vs. you have to be 21 to get cigarettes," Terry said.

He said he believes politicians can do more to crack down on gun violence, and added the community can also play a role.

He credited the city's recreation department for offering leagues and programs for youth to participate in and providing free books, which Terry has available in his shop.

Henderson Police did not respond to an interview request from ABC 11 about the shooting.