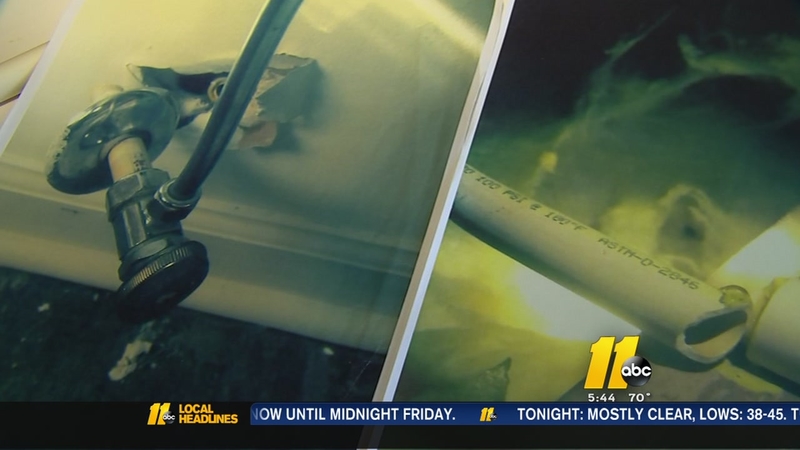 Are home warranties worth it?

A home warranty is appealing to many homeowners as it's often advertised as protection when you have an unexpected breakdown of an appliance or home system.

I get a lot of complaints from viewers when it comes to the coverage home warranties actually provide. After filing a claim, many homeowners say the warranties are just not worth it.

Stay on top of consumer news with the ABC11 News App

Home warranties are service contracts and you need to understand they are not an insurance policy. You either pay monthly or yearly for the service contract, and there are a number of companies who offer different home warranties. The warranties cover basic breakdown of appliances and more complex issues such as the HVAC system in your home.

"WE HAVE A WARRANTY, WE'RE NOT WORRIED"

Holly Springs homeowners Steven Janawsky and his wife took comfort in knowing that if something happened to their home, the home warranty they pay $40 a month for would cover the repair.

"We have a warranty, we're not worried," Janawsky said. He says they had a few minor repairs which the home warranty did cover, but when it came to his latest claim, he says it's been nothing but frustrations.

His heating system stopped working in the middle of winter. Janawsky said the home warranty company sent a technician to look at the HVAC system.

"In their wording, they said this should not be a problem; 'you should get a new unit,' " Janawsky said.

Instead of a quick approval, Janawsky said he waited weeks while their claim was "under review."

Janawsky said he and his wife spent hours on the phone with home warranty representatives trying to get approval for a new unit. Meanwhile temperatures dipped below freezing and the Janawskys were just trying to keep warm.

After weeks of waiting, they got in touch with the ABC11 Troubleshooter. Once I reached out to Janawsky's home warranty firm, Janawsky said they did finally give the approval for a new HVAC unit.

Another round of frustrations ensued though, as Janawsky says their out-of-pocket expenses were $1,200 despite having the home warranty. The $1,200 was for items the home warranty does not cover.

Janawsky and his wife opted for their home warranty company to do the HVAC replacement despite the $1,200 of out-of-pocket expenses.

Garner resident Robert Harris is also not happy with how his home warranty handled his claim.

When he bought the home, Harris says a big selling point was that a home warranty was included for the first year.

He says shortly after moving in, he noticed the toilet leaking. He shut the water at the toilet to prevent more problems, but when he tried to turn the water back on to fix it, he says the pipe snapped -- flooding the entire bathroom all the way through the floor to the ceiling beneath.

He made a claim with home warranty as the paperwork he has says it covers leaks and breaks of water lines, but the claim was denied.

"They claim I broke the line and it's not considered normal wear and tear." Harris said. He fought the denial, even hiring a plumber who put in writing that the types of pipes Robert has do leak and become brittle over time and that it's normal wear and tear on a 20-year-old home.

"They didn't cover anything," Harris said. "I wouldn't waste my money with one. The big thing is just put money aside for emergencies, put it into a savings account."

SWEATING IT OUT OVER AC REPAIRS

He filed a claim with his home warranty, but weeks later he was still waiting.

Homeowner Earl Vincent was sweating it out over AC repairs.

"Me working all day long in 95 degrees; I just had to break down and buy some window air conditioning units," Vincent said.

He says he bought more than $500 worth of window air conditioners to try to keep cool.

Vincent said his home warranty company was only going to reimburse him for $75 for a window AC unit. He reached out to me, and things changed.

"Things moved along fairly well. I want to thank you for that," Vincent said about getting me involved in his fight.

Vincent now has this advice for others considering a home warranty: "If you have a home warranty, read the small print and there will be a lot of additional costs."

Despite his frustrations, Vincent says he's keeping his home warranty just in case.

ADVICE FROM AN HVAC PRO

Jeff Daulton with Jeff Daulton A/C Systems has been in the HVAC business for years, and says he used to do work for many home warranty companies.

"They're trying to make a profit and the least amount of money they spend the better," Daulton said.

He said he stopped doing work for home warranty companies after too many headaches.

"Just the time it would take to get approvals and make repairs and the frustrations we would see on the homeowners face because they would be told it was their fault for lack of maintenance," Daulton said.

He also says he understands homeowners' frustrations as he says the home warranty companies he worked for always wanted to try to repair the system even if it was obvious the system needed to be replaced.

"Just beware of what you're getting into when you sign up for it and they are not eager to replace your whole system," Daulton said.

The best advice before you sign a contract with a home warranty company is to see exactly what is covered. Check with the Better Business Bureau as you will see what current customers are saying about their home warranty.

I reached out to two of the biggest home warranty companies, and they have told us that with thousands of service requests each day they are forced to limit coverage to what's in the contract to keep coverage at an affordable price.

They also added that they do work with their customers to provide them the best possible coverage. Before agreeing to a home warranty, you should also read the fine print to determine what's covered and what's not.