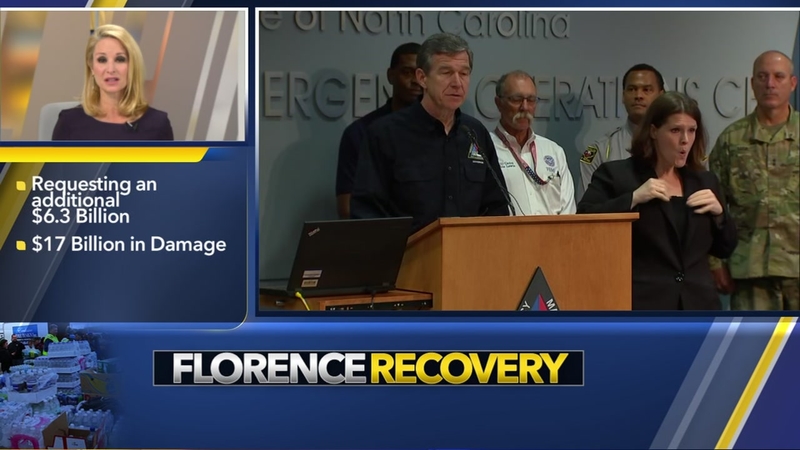 WASHINGTON (WTVD) -- North Carolina Governor Roy Cooper is doubling down on his efforts to draw significant support from the federal government for hurricane relief and is requesting an additional $6.3 billion from Congress to help in the recovery.

The formal request, submitted on Wednesday, follows a series of meetings on Capitol Hill with North Carolina's congressional delegation and members of the Trump administration.

"North Carolina has much work to do to build back stronger and smarter, and we are counting on North Carolina's congressional delegation to help us get this done," Cooper said, with a direct call to the Tar Heel State's two senators and 13 congressman. "I'm proud of the people of our state who are working together to overcome disasters like Hurricane Florence. Now it is our job to work together to rebuild our state and I appreciate the work of North Carolina's U.S. Senators and Members of the House."

In his interview with ABC11, Cooper identified three key areas for federal aid: Housing, agriculture, and infrastructure. He said he hoped lawmakers can approve the aid as part of a larger spending bill on the agenda for this month's lame-duck session.

In letters to both the state's congressional delegation and other senior members of Congress involved in appropriations, Gov. Cooper's request offers these specific needs to warrant additional aid:


According to the Governor's office, the new request would bring North Carolina's full federal request to $8.8 billion (the remaining $2.5 billion is already anticipated through FEMA, the Federal Emergency Management Agency, and other sources such as the Small Business Administration and the Department of Housing and Urban Development).

With state officials estimating the total cost of damage from Florence at $17 billion, a full appropriation from Congress cover approximately 52 percent of the disaster, roughly the same percentage offered to states affected by other major disasters since Hurricane Katrina in 2005.