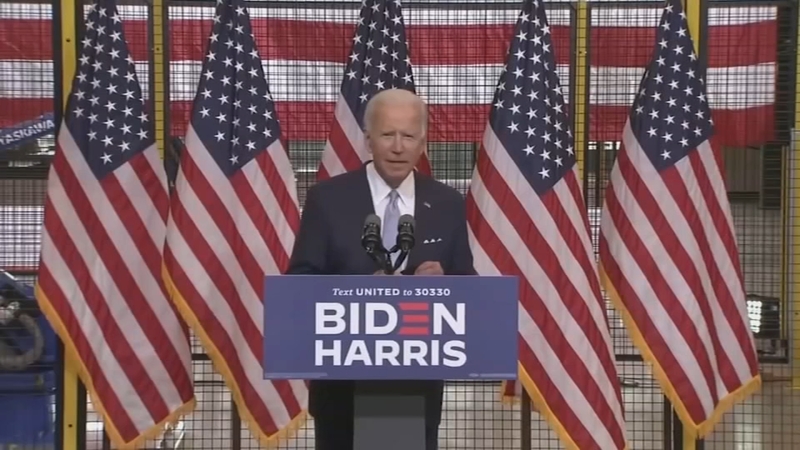 The former vice president and current Democratic presidential candidate knows he's going to have to start traveling the country to win voters in swing states like North Carolina.

"What I don't want is get large crowds of people," he said in an exclusive interview with ABC11 on Tuesday. "I want to abide by the state rules are in terms of a number of people that can be assembled. I plan on being there in the not too distant future."

But when, exactly? He wouldn't get specific but he did say he plans to travel responsibly.

"The American people are looking for responsible leadership on COVID. They shared sacrifice on weddings, funerals, family events. They should expect the same responsibility from a presidential candidate or a president. I'll be there. I promise you, I'm coming," he said.

Biden condemned any violence, including in Raleigh where a small group of protesters vandalized buildings Friday night.


Republicans, led by President Donald Trump, have been relentless in their criticism of Biden, whom they label as "weak" as opposed to Trump's prioritizing "law and order."

"Everyone talks about this as if I'm already president," Biden said. "The fact is this is Donald Trump's America. Donald Trump has done nothing more than pour gasoline on the fire. I have condemned the violence from the very beginning."

Still, Biden himself has also faced criticism about being too tough on crime because of his role co-authoring the 1994 Violent Control and Law Enforcement Act; also known as "The Crime Bill." The legislation put more than 100,000 more police officers on the street, boosted funding for prisons and cracked down on domestic violence, among other provisions. The North Carolina General Assembly, moreover, followed up with its own Structured Sentencing bill that generally remains the basis for conviction felons.
"The arguments about the Crime Bill that have been made are not accurate," Biden said. "There weren't all these life sentences and increasing prison populations. As a matter of fact, violent crime dropped precipitously. Just look at the facts. Even as vice president, violent crime fell 15 percent in the U.S. without this chaos and disorder. Under Trump, the murder rate is up 26 percent in cities across the nation this year. COVID has taken more lives in an outbreak in 100 years."