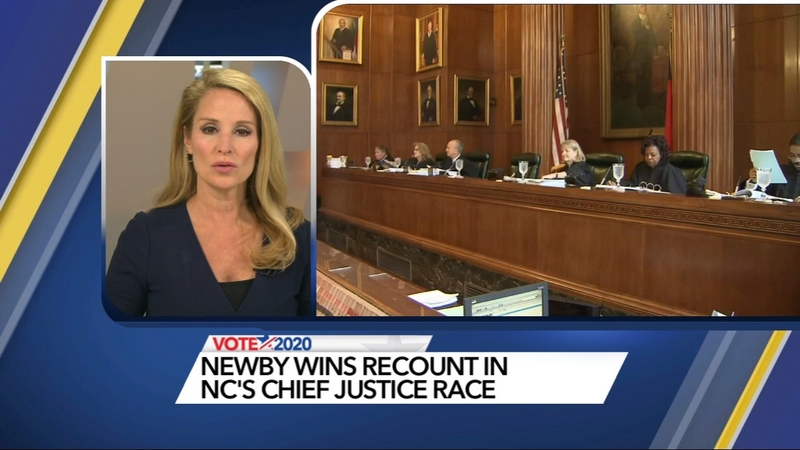 "The recount showed minor differences from canvassed vote totals, but did not change the outcome of the contest," said Karen Brinson Bell, executive director of the State Board of Elections. "We appreciate the hard work of the county boards of elections throughout the recount process."

When the recount was initially requested in mid-November, Newby led by 5 votes.

"We are very disappointed that Cheri Beasley has requested another recount in her quest to overturn the election of Paul Newby as our next Chief Justice of the North Carolina Supreme Court," said North Carolina Republican Party Chairman Michael Whatley. "The statewide recount which was completed last night confirmed Justice Newby's win and Beasley has failed to pick up a single vote in any of the 92 counties where she has filed a protest. Rather than ask for a second recount, which will merely delay the certification of this race, Beasley should gracefully concede."

If the recount were to differ from previous results, then a statewide hand-to-eye recount of all ballots would be conducted.

Counties across North Carolina will begin the recount early next week.

"The county boards of elections have worked tirelessly throughout the recount process," Brinson Bell said. "We cannot thank them enough for continuing to ensure voters' voices are heard and that the results are accurate."

Under state law, each of the 100 county boards of elections will conduct a hand-to-eye count of all ballots in 3% of its precincts, rounded up to the next whole number of precincts. Each one-stop early voting site is considered a precinct for the purposes of a recount.