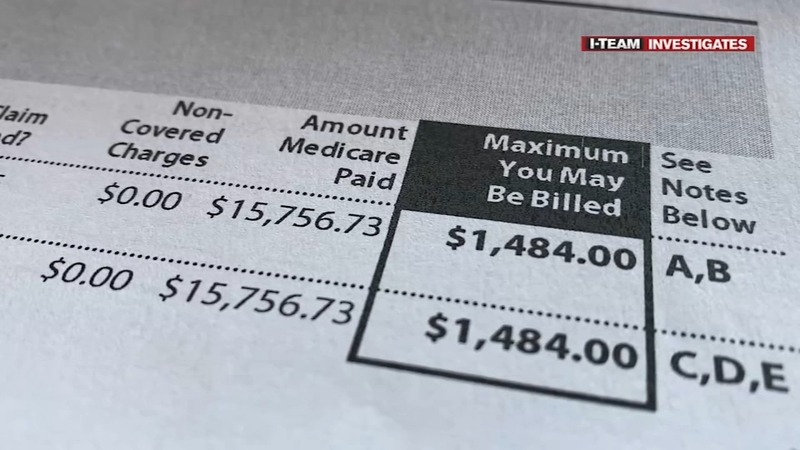 When Harold Ward found himself hospitalized for COVID-19, his first thought was on staying alive for his family.

"You live your life, and you are doing everything you want to do, and then something hits you so hard that it wants to take all that away from you," Ward said.

He wasn't thinking of what the cost would be to stay alive; that reality hit later.

"Nothing I've ever been through it was a comparison to how I feel. It was really like the life was being sucked out of me, and there was nothing I could do to just stop it," Ward remembered.

The disabled veteran and father of four stayed in the hospital for five days before he fortunately, recovered and was discharged with oxygen. As he regained his strength, hospital bills began to come.

He said he believes his stay in the emergency room totaled $36,000 and an initial issue with billing left him on the hook for more money than he was anticipating.

The continual bills hit hard as he tried to piece his recovery together.

"The more I get the bills and stuff like that, and the more that I have the stress from everything going on. It just gets worse. And so it hurt, it didn't only hit me on a physical level, it hit me on a mental level, too," Ward said.

Ward said he had to fight to get the proper coverage on his hospital bills and it took a toll; increasing his stress and depression.

"I'm still trying to get myself back together, because my kids, I can't let them see that I'm stressing over this because they got their own lives and I want them to be kids I want them to grow up and be happy," Ward said.

Ward was able to fight to reduce much of his bills and is hopeful the VA will work with him to cover the remainder, but he calls for improvements in the future.

Ward's not the first nor last COVID-19 patient who has to fight dual battles; one with their health and another with their bank account.

The federal government mandated COVID-19 testing and vaccines be free for everyone but didn't extend those same protections to costs associated with treating COVID-19. While many private insurance companies did waive treatment fees, that coverage is expiring at the same time hospitalizations are skyrocketing across the U.S.

Many healthcare advocates fear the effect that COVID-19 hospitalizations will have on the insurmountable medical debt many Americans already face.

"This is not just a problem for COVID. It's a problem for anybody with any sort of a significant illness or chronic illness, where in addition to dealing with the illness, you've got to deal with the bills in our system. And it's really not just a COVID scandal, but an ongoing scandal in our system," said Eliot Fishman, Senior Director of Health Policy at Families US, a national nonpartisan consumer health care advocacy organization.

A study published last month in JAMA estimated across the U.S. collection agencies had $140 billion in unpaid medical bills before the pandemic.

Researchers found nearly 1 out of every 10 Americans had medical debt in collections.

The debt was the highest in southern states, like North Carolina, that did not expand Medicaid.

"So for people who are low income in the state of North Carolina, they're much more likely to be uninsured," Fishman said. "People with no insurance, unfortunately, what we've seen is that are much more likely to avoid care for COVID because they're worried about those bills and that's disastrous."

The July study found that while the average patient owed $429, patients in the South owed an average of $616.

Many COVID-19 patients who are hospitalized face much larger bills.

FAIR Health estimated the average cost of a COVID-19 hospitalization was $38,000 for patients with insurance and $73,000 for uninsured patients.

"We are not talking about problems we can solve them by flipping a light switch," Fishman said. "These problems have developed over years, and it's just going to take years of pressure from people who have had enough and are not willing to take it anymore."

Fishman said he is hopeful that the pandemic will be a turning point in the conversation regarding affordable healthcare in the U.S. He pointed to a law passed that reduces deductibles and proposed legislation from President Joe Biden as positive changes going forward.