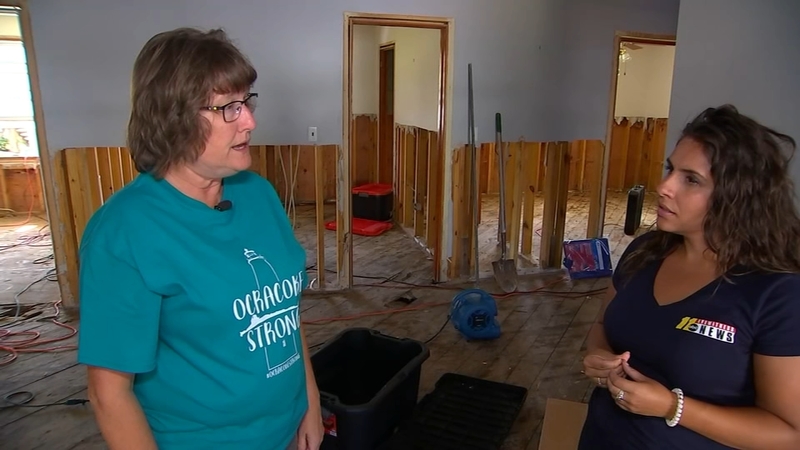 OCRACOKE, N.C. -- Residents on Ocracoke Island are still recovering from the battering they took when Hurricane Dorian roared through earlier this month.

The barrier island got another visit from Gov. Roy Cooper on Monday.

Two sisters who had to ride out the storm two weeks ago said they had to make a quick decision that day about whether they were going to stay in the home that has been in their family for 10 generations.

"You just had to go. There was no thinking if you didn't want to you just had to go," Trudy Austin said. "It was already up to here so we couldn't open the door. I remember holding onto the railing and stepping. The water's real murky at that point. You can't see anything."

At that moment, the sisters knew their only choice was to swim.

"It was over the rails here, so that's why it was to my neck," Austin said. "And I couldn't feel the ground."

Fortunately, they reached the steps on their rental property next door, which was not damaged.

That includes her mother's wedding book with messages of well wishes and the family Bible.

Austin said that even though it's hard to see right now, they will rebuild.

Cooper examined recovery work on Monday. He was joined by Cabinet members and emergency management officials.

State agencies and nonprofits have provided food and water, fuel, medical care and portable toilets and showers. Ocracoke access is still limited to residents, homeowners and some others.

Cooper visited Ocracoke the day after Dorian departed the North Carolina coast. He said a 67-year-old Pamlico County man fell off a ladder while preparing for the storm, the state's second Dorian-related death.