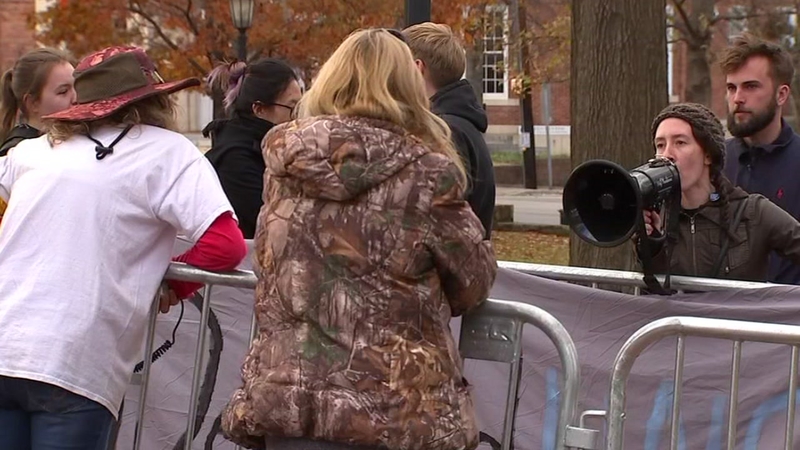 CHAPEL HILL, N.C. (WTVD) -- Sunday was the battle of the bullhorns, as supporters of UNC-Chapel Hill's Silent Sam Confederate monument and those who oppose it faced off where the statue once stood.

"We don't dialogue with (expletive) fascists!" yelled one counter-protester.

"Oh, what a vernacular," replied a Silent Sam supporter. "You kiss your mother with that mouth?"

The battle over #SilentSam is a back and forth shout match between protestors against the monument and those fighting for it @UNC. The @UNC_System rejected the school’s proposal to build a $5.3 million history center to house the confederate statue. #ABC11 pic.twitter.com/8Wsq8dTRlV

The showdown comes just days after the UNC Board of Governors rejected UNC-Chapel Hill's $5.3 million proposal to build an education and history center to house the now-defaced statue.

Supporters of Sam said it should not go in a museum.

"The law says it needs to be put back (on its pedestal)," said Jenna Bernstein, a supporter of Silent Sam.

Counter-protesters say to them Silent Sam is a symbol of oppression against black Americans and is intimidating for non-white students and so-called marginalized groups.

The sides verbally sparred all day.

"If you attack me, I will put you in your grave," shouted a Silent Sam supporter who was arguing with a counter-protester while leaving the campus.

"You all are associated with the same group that marched with swastikas and murdered Heather Heyer in Charlottesville," shouted a counter-protester who suggested the pro-monument group gathered Sunday share similar ideals with the group who held a white nationalist rally in Charlottesville last year.

"I'm Jewish, and I'm tired of hearing Nazi, Nazi, Nazi. What, are you kidding me?" Bernstein said. "I agree that there is a lot of systemic racism and anti-Semitism. We really need to fix that and fixing that is having an open dialogue."

It's still not clear where Silent Sam is stored.