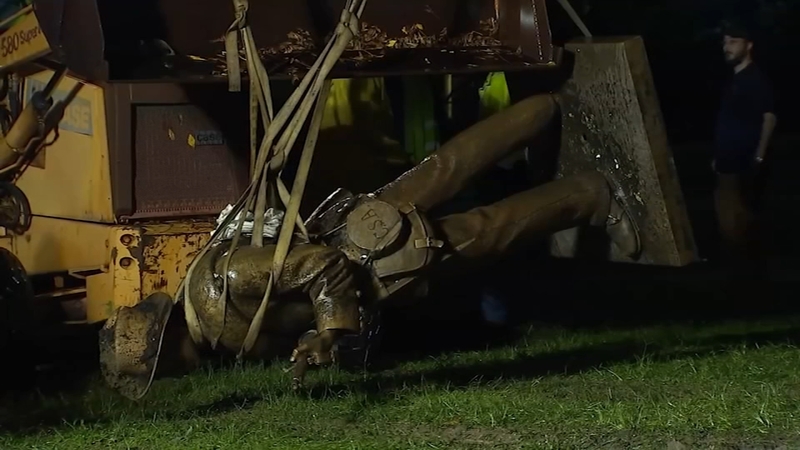 CHAPEL HILL, N.C. -- A judge has overturned the controversial deal between the University of North Carolina System and the Sons of Confederate Veterans over the Silent Sam monument. The agreement gave control of the statue to the Confederate group.

The deal, struck without public knowledge before Thanksgiving 2019, gave Silent Sam to the Sons of Confederate Veterans, set up a $2.5 million trust to pay for things related to the monument, and forked over an additional $75,000 to the Confederate group in exchange for the group agreeing to not wave Confederate flags on any UNC campus during the next five years.

Judge Allen Baddour ruled Wednesday that the settlement between the two groups does not have standing.

His ruling dissolves the $2.5 million trust. However, attorneys for Sons of Confederate Veterans said some of that money has already been used.

Before the ruling, attorneys for the UNC System said overturning the settlement could mean that Silent Sam will legally have to go back up on UNC-Chapel Hill's campus.

"While this was not the result we had hoped for, we respect the Court's ruling in this case," Ripley Rand, outside counsel representing the UNC System and the UNC Board of Governors said. "Judge Baddour gave us a fair hearing, and he afforded all parties the necessary time and consideration to be heard. The Board of Governors knew from the very beginning that this was a difficult but needed solution to meet all their goals to protect public safety of the University community, restore normality to campus, and be compliant with the Monuments Law. The Board of Governors will move forward with these three goals at the forefront and will go back to work to find a lasting and lawful solution to the dispute over the monument. We appreciate Judge Baddour's consideration in this case and we respect his decision in this matter."

To argue the deal was valid, the board and the ancestry group referred to the statue's origins and argued that the Sons of Confederate Veterans were essentially the successors to the people who led the effort to erect the statue that was dedicated in 1913. The United Daughters of the Confederacy had raised money for the statue and gave the monument to the university on the condition that it stand as a permanent memorial, Rand said.

After the statue was torn down, the group first asked for the statue back, but then transferred their property rights to the Sons of Confederate Veterans last year, Rand said.

Rand said the university governing board moved quickly to reach an agreement with the SCV because it could have otherwise taken years to resolve a lawsuit.

"The time and uncertainty and the risk involved in waiting on a court to decide these issues was unacceptable to the Board of Governors," he said, adding: "The message that the Board of Governors received from the university community was clear: 'We do not want the monument back on campus.'"

Boyd Sturges, an attorney for the Sons of Confederate Veterans, said his clients had a valid claim to ownership, and thus had standing in court, though he acknowledged the issue was complicated. He also acknowledged not everyone was happy with the settlement.

"My clients' ultimate issue is honoring the dead from that era," he told Baddour.

But Baddour rejected the arguments. Ruling from the bench, he said a written order would follow, because he had waited to hear the oral arguments before making up his mind.

Sturges said after the hearing that his client would honor the court's ruling. He said his group has possession of the statue and would need to figure out how to return it to the university. He declined to say where it's being stored.

Silent Sam was a monument dedicated to the more than 1,000 UNC students who fought and died in the Civil War. The prevailing narrative is that the Daughters of the Confederacy gave UNC the statue as a gift, though even that is in dispute.

The statue went up in 1913, at a time when many Confederate groups and white supremacists were pushing to memorialize the South's efforts in the Civil War.

During the dedication of Silent Sam, speakers stood up praising the statue with racially-charged remarks- - including Julian Carr, a Democratic Party and Methodist church benefactor who praised "horse-whipping a negro wench until her skirts hung in shreds," because she insulted a white woman on Franklin Street.

A look back at the history of UNC's Silent Sam statue.

Carr who was instrumental in the growth and development of UNC-Chapel Hill and Duke University, also has the Town of Carrboro named after him.