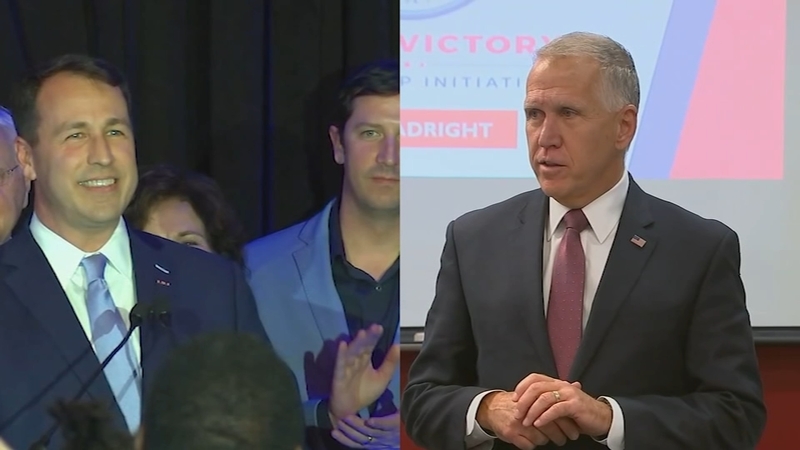 NC will be one of the closest Senate races, local expert says

RALEIGH, N.C. (WTVD) -- The eyes of the nation remain on the hotly contested U.S. Senate race in North Carolina, as both Senator Thom Tillis and Democratic nominee Cal Cunningham deal with recent revelations.

On Friday night, Tillis, the Republican incumbent, announced he had tested positive for COVID-19, while, hours later, Cunningham confirmed and apologized for an exchange of sexual text messages with a California strategist.

The text messages were between Cunningham and California strategist Arlene Guzman Todd, according to our newsgathering partners The News & Observer.

ABC11 spoke to Jason Roberts, a political science professor at UNC-Chapel Hill. Roberts says this senate race could change the national political landscape, "This is one of the closest Senate races in the country, and this race could end up deciding majority control of the Senate."

With that, Roberts says every move each campaign makes could play a factor in the final results. According to Tillis, as of Saturday evening, he's dealing with mild symptoms and plans to self-isolate for 10 days, something that could hurt him in the final stretch.

RELATED: Sen. Thom Tillis spokesperson says he has mild symptoms of COVID-19, no fever and is in great spirits

"That's clearly going to put a crimp in his ability, himself to be out and meeting with voters and holding rallies," Roberts said.

In addition, Tillis's diagnosis, along with other major conservative political figures testing positive, who were at Judge Amy Coney Barrett's nomination in the Rose Garden on Saturday, is putting a spotlight on the Republican Party's approach to the pandemic.

"You're seeing a large outbreak among Republicans and what it's really doing is focusing people's attention on COVID, rather than the other issues Republicans would want to talk about," Roberts said.

Meanwhile, Cunningham's push for the Senate seat is currently shrouded by scandal. Roberts tells Eyewitness News that the busy news cycle could help his case, "This, hopefully for him, he would be hoping that this will pass through and not get the attention that it otherwise would".

An ABC contributor says Cunningham currently has a five-point lead in the polls. Roberts believes both revelations won't play a major role in who most North Carolinians vote for on Nov. 3.