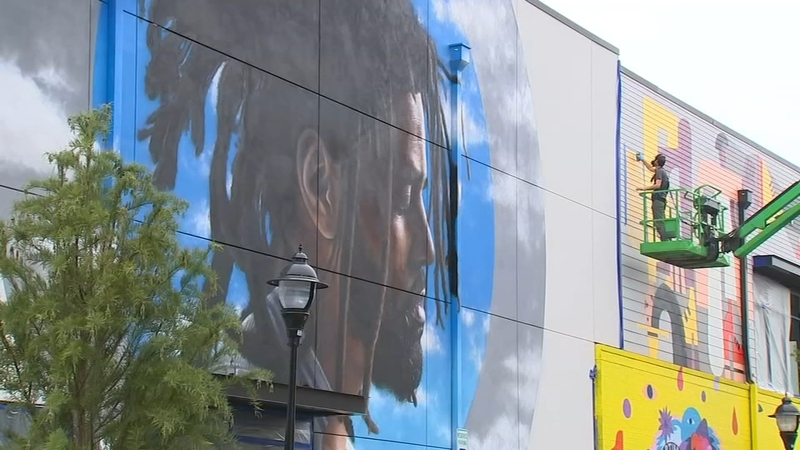 DURHAM, N.C. (WTVD) -- It's described on the UHILL Walls website as "a dense, walkable art experience with over 40,000 square feet of murals on 15 contiguous acres in Durham," but to really appreciate the Bull City's latest attraction a drive to 3806 University Drive is recommended.

The burst of color and large scale images you see as you approach comes from "Forty other murals and artists here! It's a really big deal," said Durham artist Darius Quarles, "just to get the word out that Durham does possess a lot of quality talent!"

Candy Carver, another Durham artist, told ABC11: "We've been out here since Sunday, artists from all over the country. From LA, from Kentucky, from Wyoming and New York. Everywhere!"

Organizers identified Saturday as the final day for work on the murals at the mixed-use development called University Hills, but Quarles said weather delays would probably keep some of the artists there through the weekend.

Among the images of notable Durhamites:


Most prominent, as you approach the entrance of the new O2Fitness, is the mural of Phil Freelon. He's the renowned Durham architect who designed many prominent buildings, including the Smithsonian National Museum of African American History and Culture in Washington D.C. before his death in 2019.

"Once I heard of his passing, there had been conversations within the art community about something to speak to his legacy," said Carver during a break from painting the Freelon mural. "This is a really important person, I will see his children and grandchildren on the street as I walk around. I don't want to be the person to mess it up, so I take it very seriously, right? But I'm glad I said yeah!"

She said the assignment to paint that mural came from the project's organizers but she had contact with the Freelon and his family before he lost his battle with ALS.

Quarles didn't know which assignment he'd receive once chosen to participate, but he says by the luck of the draw his mural depicts a musical group that he's followed since arriving in Durham 16 years ago.

"When I moved here, Little Brother was huge! Still huge, in my playlist today," he said. "So I got really, really lucky! I could ask for any other group, especially out of Durham, for me to put my skills, my technique on them. The scale kinda had me a little scared in the beginning, because I hadn't done anything like this yet. But UHills and Sunbelt, provided the proper equipment for us to project and stay in our proposals, our sketches of the idea."

The effect is like an outdoor art gallery where people who appreciate their work can come up here, see the artists at work, and tell them thanks.

"It's a great idea," said Gary Tyson as he and his wife enjoyed the colorful views now available where an abandoned shopping area once stood. Heidi Tyson agreed: "I just love having the art, and the colors, it just brightens up the community! Something awesome to do, during these crazy days."

Now, as admirers and those who appreciate fine art travel to Durham for a look at the murals, Carver hopes "the two-dimensional spaces covered with mural work will be the catalyst for some of these other opportunities to be presented to other artists in our own community. There's some amazing work!"