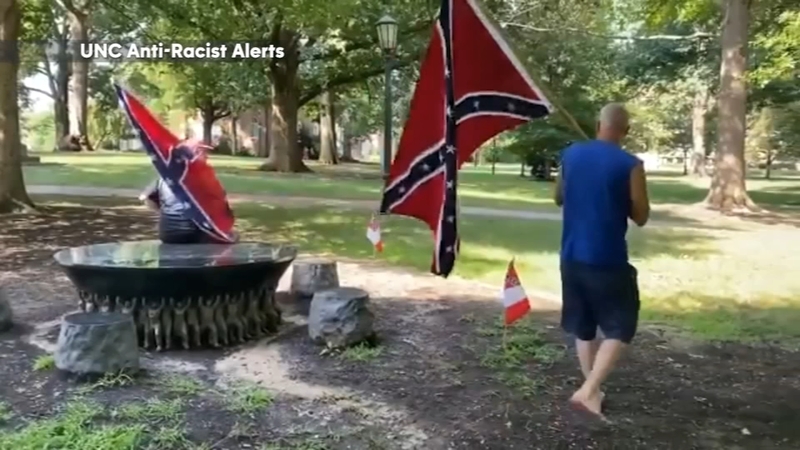 Photos and video, posted on Twitter by an account called UNC Anti-Racist Alerts (not affiliated with the university), show two men sitting on the monument holding the Confederate flag -- one of whom is holding a white power symbol.

In one of the videos, one of the men can be heard saying: "It would be nice to have a couple slaves." He then made a whipping sound and motion.
The Unsung Founders Memorial, erected in 2005, in McCorkle Place as a counterpoint to the now-removed Silent Sam Confederate monument.

"The Class of 2002 honors the university's unsung founders, the people of color bond and free, who helped build the Carolina that we cherish today," the inscription on the stone table reads.

UNC Police said four officers responded and remained there to watch the two individuals until they left campus after about an hour later.

Vice Chancellor for Institutional Integrity and Risk Management George Battle issued a statement on Monday that said: "As UNC-Chapel Hill is a public university and state agency, we must allow demonstrations and free speech, in accordance with the First Amendment and North Carolina Campus Free Speech Act, even when it does not align with the values of our campus."

There is no campus policy prohibiting congregating around the monument.

"The Unsung Founders Memorial remains a high priority for the Commission on History, Race, and a Way Forward. Chancellor Guskiewicz asked the commission to examine broader plans for the Unsung Founders Memorial in its initial charge," Vice Chancellor for University Communications Joel Curran said in a statement. "Protecting the monument from vandalism and ensuring the monument is treated appropriately and respected remains a priority for the University."

Saturday's desecration came hours before a pro-Confederate rally in Hillsborough -- a town 20 minutes north from the school.
In the past month, race relations on UNC-CH's campus have been particularly tense after acclaimed journalist Nikole-Hannah Jones' declined the tenured Knight Chair position following several weeks of internalized debate on the university's behalf.

Members of UNC-CH's Black community organized on the campus Wednesday to list their demands for safety and equity on campus. The group demanded leadership have anti-racist alerts sent to students, hire more Black full-time counselors trained in racial trauma and publicly available equity scorecards explaining the racial make of departments and why Black faculty and staff leave the university.

"Over the weekend, two individuals came to our campus and expressed gross, violent and offensive words and actions at the Unsung Founders Memorial. These words and actions threaten the sense of belonging that we are working to cultivate on our campus and do not represent our values. I unequivocally condemn this abhorrent behavior. In response, I have expanded security around the Memorial, including putting up fences and increasing our police presence."

Members of UNC-Chapel Hill's Black community came together to present their demands to university officials following Nikole Hannah-Jones' denying a tenured position with the shcool.