Wilmington Confederate monuments come down in the interest of public safety 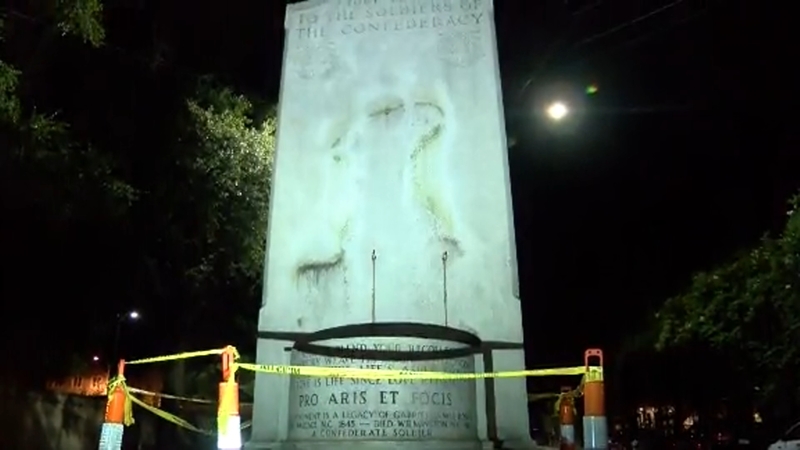 WILMINGTON, N.C. (WTVD) -- Amid calls for change in the battle for racial equality in America, more Confederate monuments are coming down, including here in North Carolina.

The most recent statues to be taken down in the Tar Heel state are in Wilmington, where a monument to George Davis and a Confederate memorial were removed on Wednesday night.

Wilmington leaders said the decision to bring down the monuments were made in order to protect the public safety and to preserve important historical artifacts. The Davis monument was erected by the United Daughters of the Confederacy and unveiled in 1911. Davis, who was born in Wilmington, was an Attorney General of the Confederate States.

The Confederate memorial that was removed honors the soldiers of the Confederacy and was completed in 1924.

SEE ALSO: This Wilmington man was one of the most important leaders during the Civil War, but his legacy was erased from history for 100 years.
EMBED More News Videos

Earlier Wednesday, the dismantling of a 75-foot monument on Capitol grounds in Raleigh was completed after protests forced Gov. Roy Cooper to order all monuments on the Capitol grounds to be moved "to protect public safety."

A Raleigh statue of Josephus Daniels, a noted white supremacist who used the newspaper to further his racist ideals, was removed earlier this month.

Pedestrian activity was monitored around the Wilington statues in the days leading up to the removal. A city Spokesperson told media "While members of the community have expressed a desire to see these monuments moved for many years, recent protests and controversy over these monuments has grown to a point that the monuments, in their original locations, were a threat to public safety," according to a WWAY report.