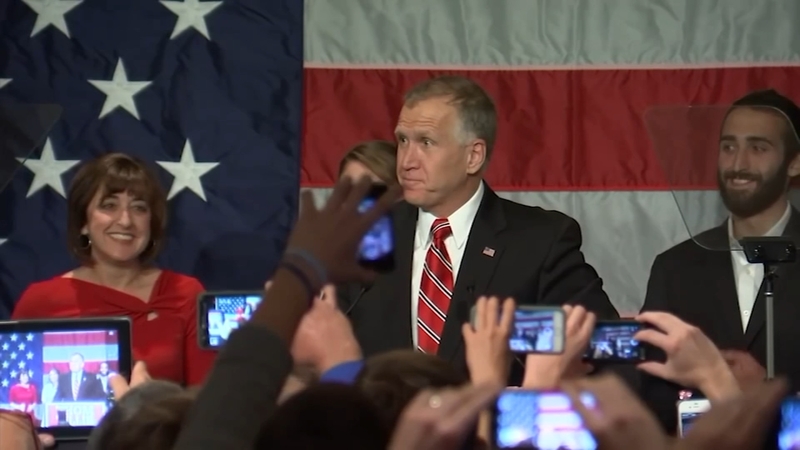 NC will be a battleground for 2020 election

RALEIGH, N.C. (WTVD) -- North Carolina is tied with New York for the second-most number of Congress members choosing not to run for re-election in 2020, just part of why political analysts said they believe the state will draw considerable national attention ahead of the 2020 election.

Earlier this month, District 2 Rep. George Holding and District 6 Rep. Mark Walker announced they would not seek re-election; both represent areas impacted by redistricting. Larry Sabato's Crystal Ball at the University of Virginia Center for Politics lists both those seats as "Safe Democratic," representing a likely two-seat flip. Holding himself cited the new maps as playing a reason in his decision.

The decision by Rep. Mark Meadows, the high-profile and vocal supporter of President Donald Trump who represents the state's 11th District, to not run again was more surprising, though Meredith College Political Science Professor David McLennan said he believes the seat will likely remain in Republican control.

Despite the slew of announcements, McLennan is not anticipating any shift in Republican ideologies.

He said he believes Democrats will try to use the retirements as a catalyst for all races in the state.

"They are obviously targeting 2020, not only to take over the White House but to build some advantage in the US House and try to take back the U.S. Senate seat in North Carolina. So they'll use retirements as a tool to fundraise and to put together some campaign ads," McLennan said.

Outside the Congressional races, Democrats are likely to target Sen. Thom Tillis, who narrowly defeated incumbent Kay Hagan in 2014.

"They're definitely going to go after Tillis. This will be one of the more expensive races in the country. We've seen North Carolina be a battleground state for Senate races for a while," McLennan said.

Generally, McLennan said he believes Democrats will run lower-level races as a referendum on President Trump.

In 2016, President Trump carried North Carolina by about 3.6 percent, slightly better than Mitt Romney's effort in 2012. Despite back-to-back Republican victories in the state, analysts view North Carolina as a toss-up in 2020. Combine that with retiring Congressmen and a sought-after Senate seat, and North Carolina will likely be the focus of big ad-spending and high-profile campaign stops.

Democratic presidential candidates, including Joe Biden, Pete Buttigieg, Bernie Sanders, and Elizabeth Warren have all made stops in North Carolina so far.