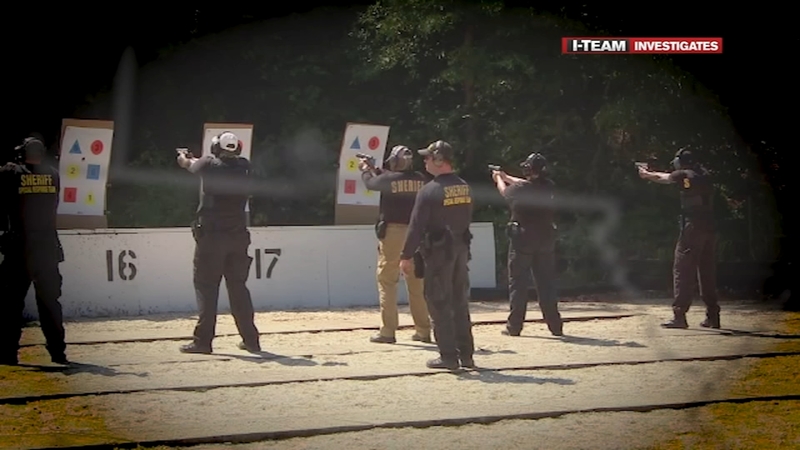 Number of officer-involved shootings decreased in 2021

RALEIGH, N.C. (WTVD) -- Thirty-seven people were killed in shootings that involved a North Carolina law enforcement officer in 2021, according to data from the National Gun Archive. Another 26 individuals were injured during these incidents.

The Gun Violence Archive compiles data from media, police and government reports since no comprehensive database exists, which means the true number of shootings could be higher.

Despite the slight dip in incidents in 2021, the data shows the yearly average during the past few years has increased.

An average of 12 more people were injured during police shootings in North Carolina in the past four years than between 2013 and 2017.

An average of 40 officer-involved fatalities were reported a year since 2019. Between 2014-2018, North Carolina averaged around 28 fatalities.

Shootings in Fayetteville accounted for the second-highest number of fatal officer-involved shootings since 2014, according to the Gun Violence Archive. Thirteen incidents are connected with the city. Durham and Raleigh each reported six since 2014.

In the past five days, three fatal shootings involving law enforcement officers are under investigation across all three cities. The North Carolina State Bureau of Investigation is independently reviewing the incidents in Fayetteville and Raleigh.

"The use of deadly force is scrutinized very thoroughly by the public and our investigative process as it should be. It's always a tragedy, even in those overwhelming number of times that the officer is acting correctly," said Eddie Caldwell, the executive vice president and general counsel for the North Carolina Sheriff's Association.

"Recent situations have been a child or another victim in a store situation, where the assailant is using deadly force against the innocent citizen. And when the officers arrive, in some cases, they have no other alternative but to use deadly force to resolve the situation and protect the citizen that they've been hired, trained and are expected to protect," said Caldwell.

Though he said these incidents are sometimes necessary, they are always a last resort.

Across the U.S., 888 fatal police shootings occurred last year, according to the Washington Post. The news organization maintains its own fatal officer-shooting database and found a 13% decrease in fatal shootings in 2021.

As these incidents continue, officials say they believe increasing training will help ensure the best outcome.

"Most officers will never pull and aim a weapon at a person, much less fire that weapon. It's a very low-occurring event. So that's a good thing. But unfortunately, in these kinds of situations, experience is really your best teacher, and officers do not have a lot of those real-world experiences," said Lyn Exum, a criminal justice associate professor at UNC Charlotte.

"We're studying officers to see what kind of internal factors like personality characteristics, their thinking styles, years of experience, impact those decisions that they make, whether to use force or not, the timing in which they use force, and the level of the force that they use," Exum said.

His team is also exploring whether citizens' perceptions of use-of-force change after they are placed in a use-of-force stimulated experience.

The goal of the research is to create better training that can be tailored to individual officers.

"We're not trying to create robots that are police officers, but if we can kind of knife off that variability at the extremes ... then we'll have more clustering around those departmental policies, and we'll see a world where there's fewer of these more questionable shootings and that's what everyone wants, the citizens want and the police officers want," Exum said.

At the state level, law enforcement officials are after a similar goal.

"A lot of incidents nationwide has kind of highlighted the need for training and both use of force, firearms, all these types of things," said Trevor Allen, the director of the Justice Academy.

Though officers are required to regularly receive firearm training and arrest tactics, next year, use-of-force and de-escalation training will be added to basic and annual requirements.

"For officers that get their training at basic training and then don't follow that up later on and do some recurring training throughout their careers, that's when you might see some of that decision-making not come to bear as well as others," said Allen. "We have seen an increase of officers wanting and getting more and more training."