Heights House: How a 1858 mansion was converted into a boutique hotel in Raleigh 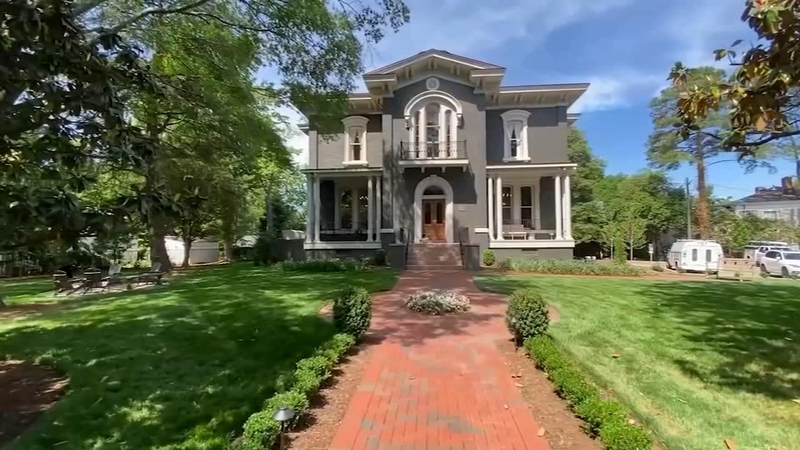 RALEIGH, N.C. (WTVD) -- Sitting on one of the highest vantage points in downtown Raleigh in the Boylan Heights neighborhood, Montfort Hall was, for many in recent years, an enigma.

The 10,000-square-foot Italianate mansion built in 1858 is one of the few pre-civil war homes left in the capital city and is on the National Register of Historic Places.

Abandoned, obscured by vegetation and rotting, it left many wondering about its fate.

INSIDE LOOK: A 1858 mansion's transformation into a Raleigh boutique hotel

The 10,000-square-foot Italianate mansion built in 1858 is one of the few pre-civil war homes left in the Capital City.

"A lot of people had not been inside this house and it had been this curiosity to them," Jeff Shepherd said.

Shepherd and his wife have lived just down the street for about a decade.

They too were among those who found it curious.

"We just loved architecture, the house, and it really spoke to us," Sarah Shepherd said.

"There's a house that is almost invisible because of the amount of overgrowth that's happened to it but at the same time you can just tell that this, this house is so grandiose and, you know, just has so much character that we at least had to find out a little bit about it," Jeff said.

So they looked up the owner.

And when she heard of the Shepherds' plan to turn it into a boutique hotel and events center she agreed to sell.

It fits with the home's history.

The man who had it built in the mid-1800s, William Montfort Boylan, was the son of a wealthy railroad magnate.

"He was an entertainer. He liked to have fun. He was a very jovial man, wasn't so super interested in business himself," Jeff said. "And what that lended to was building a house that was built to entertain. And I think that, you know, kind of resonates in what we're trying to do to allow guests to be entertained by the property."

After closing on the property in 2018, the couple had to get the property rezoned as well as plan the renovations and an addition.

They started construction with the roof to stop years of water damage.

The pandemic didn't have too much of an effect they say, maybe delaying the opening by a month or so.

"We feel really lucky that we weren't impacted tremendously like other businesses were," said Sarah.

So now Montfort Hall in Boylan Heights is the Heights House, made official in a ribbon cutting this month.

And although the pandemic is still with us, the vaccine effort is making a difference.

"I had a strong feeling that one day, we could come back to some kind of normalcy and that people would travel again and have events again," Sarah said. "And I'm grateful that we're starting to be in that in that time now."

She noted that the house sits on an acre of land, a rarity in downtown Raleigh.

And that has enabled them to not only expand its footprint with a four-bedroom addition but also the ability to put a tent on the front lawn for weddings and receptions.

The Shepherds said the Heights House website is getting bookings from local folks who aren't ready to travel yet but are curious about the house.

It's a market the Shepherds didn't expect but are glad to have.