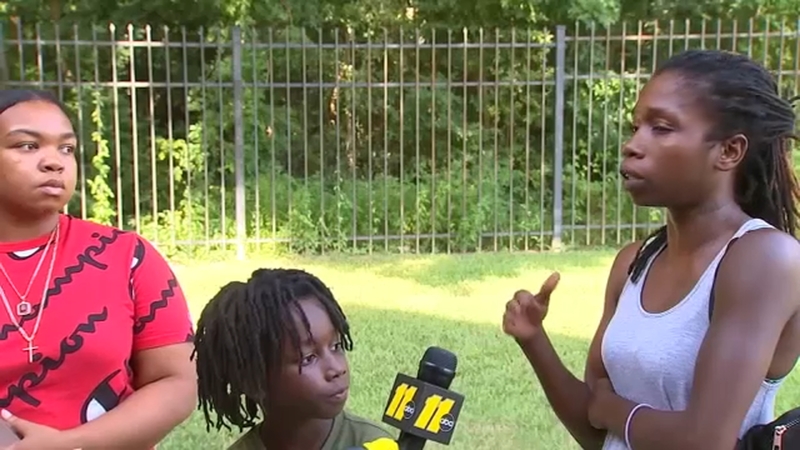 DURHAM, N.C. (WTVD) -- On August, 21 a neighbor recorded the wrongful detainment of 15-year-old Jaylin. Footage shows the teen in handcuffs with police standing around him with weapons out, other children and neighbors watched in shock and in anger.

Durham police had the wrong person in custody.

"It's scary like-- I shouldn't know what handcuffs feel like," Jaylin told ABC11. "Now that I do. It's not a good feeling."

Not only was he terrified, Jaylin says he is now traumatized after being accosted by Durham Police Department officers responding to a 911 call of a "suspicious person with a weapon."

The unarmed teen says the officers drew their guns, forcing him to the ground, cuffing him outside his home.

"No wrong moves. One wrong move. Slip up. End up dying. Like try to not die," Jaylin said.

It happened at Rochelle Manor Apartments in East Durham.

"We were just running around playing tag and the police just came out of nowhere and said put your hands up," Zakarayya said.

"They didn't tell us what we did or nothing. Guns pointed. They didn't say sorry they just walked away. Just like it was another day," said Jaylin.

Durham Police Chief CJ Davis released a statement Sunday saying that earlier that day, officers responded to weapons-related calls to Rochelle Manor Apartments, and on this call, officers believed the teen was the suspect. "Given the nature of the call, officers did have their weapons drawn," she said, however, she added that officers withdrew their weapons upon learning Jaylin was the wrong person.

On Friday, the boy's parents and the community rallied around them outside City Hall demanding accountability and change.

Zakarayya's mother, Makeba Cornelius says she felt helpless watching the wrongful detainment. She and Jaylin's mother, Ashley Harris met with the five officers involved, one of them Black, but says the meeting didn't go well.

"Their attitude was so nonchalant. It didn't matter to them. They didn't see their kid on the floor. Just another Black young boy... boys," said Makeba Hoffler. "They don't understand the trauma that they inflicted on these kids just in that second. And they need to fix it. And they need to do it quick."

"We recognize that the current climate of adverse encounters by police in communities of color around the nation continue to resonate....A thorough internal investigation is underway, and I, as Chief, have expressed to the families my sincere remorse that this incident even occurred."

"We'll see what the outcome is but she has been kind of working with us to resolve the issue," Harris said in response. "It's not a settling feeling to know that at any given moment your child can be treated like this."

The families are demanding police release the body camera videos and the 911 calls.