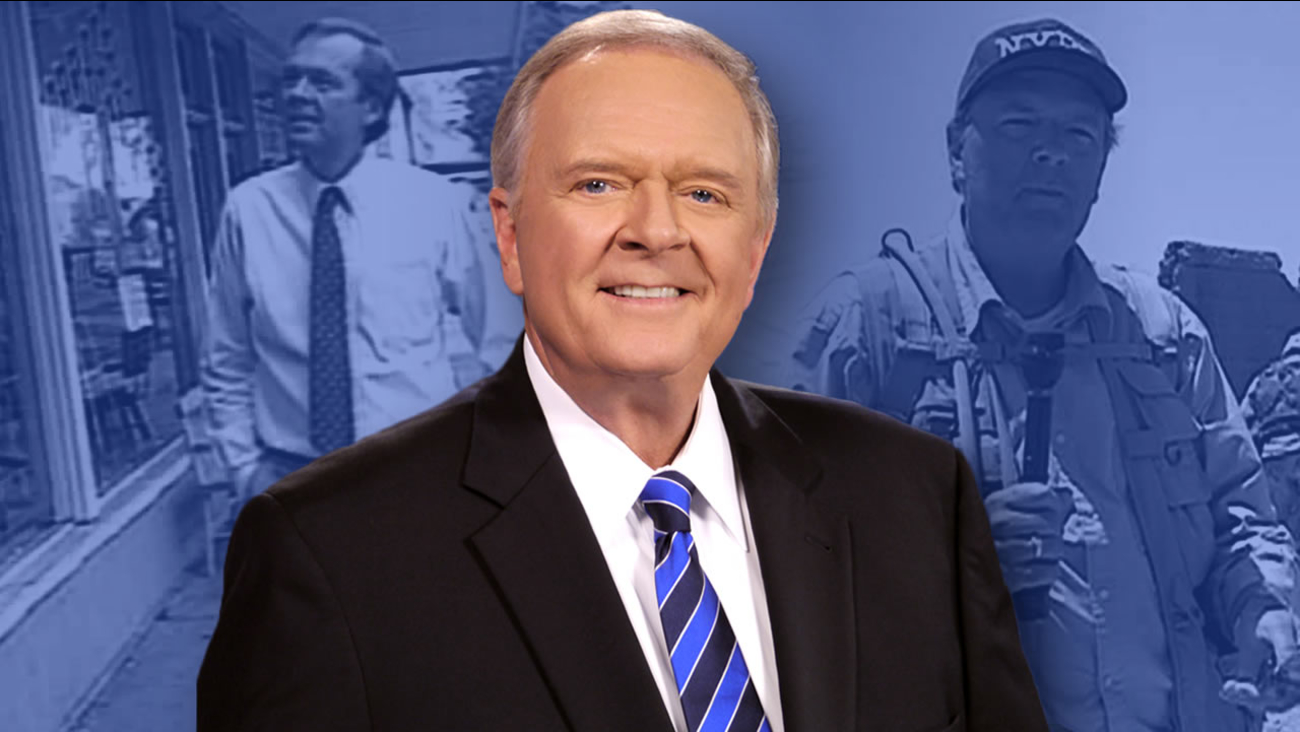 DURHAM (WTVD) -- Former ABC11 anchor Larry Stogner, considered the dean of local television news, passed away at his home Sunday night. He was 69.

"It is with deep sadness that we inform you of the passing of our beloved husband, father, and friend Larry Stogner on October 3rd. A public memorial will be held on October 12th at 7:00 pm at New Hope Church in Durham, NC. Additional details will be made available as soon as possible. The family thanks you for your love and support through these challenging times. We are so grateful for the company with which Larry has been blessed in his life."

Larry Stogner became an advocate for ALS research in retirement.

Born in Burlington, North Carolina, on October 25, 1946, Stogner was raised in Yanceyville and graduated from the University of North Carolina at Chapel Hill.

A Vietnam veteran in the U.S. Air Force, Stogner began his television career at UNC-TV and worked as an anchor/reporter at WRAL-TV before joining ABC11 Eyewitness News in 1976. In 1982, he was named anchor of the 6 and 11 o'clock newscasts.

During his 40 years at ABC11, Larry covered presidential primaries in Iowa and New Hampshire, political conventions from 1988 to 2008 and presidential inaugurations from Ronald Reagan to Barack Obama. He recorded one-on-one interviews with Barack Obama, Hillary Clinton, John McCain, George Bush, Sarah Palin, and many other prominent figures, both national and local.

Larry's experience took him to many far-off places. In the summer of 2002 he accompanied units of the 82nd Airborne Division into Afghanistan, where he provided live nightly reports from Kandahar and later produced an hour-long special Kandahar Diary. He traveled to the Persian Gulf to cover the ongoing conflict with Iraq, and to the Adriatic Sea, as U.S. Navy warplanes hammered targets in Kosovo and Yugoslavia. In 2010 he traveled to Haiti with the 82nd Airborne, providing live reports for ten days following the devastating earthquake there.

Larry also returned to Vietnam in 1995 to report on the 20th anniversary of the fall of Saigon, which effectively ended America's involvement in that conflict. His documentary called Back to Nam was nominated for an Emmy.

Other career highlights included his two long-ranging interviews with Dr. Jeffrey MacDonald, a former Green Beret Captain at Fort Bragg serving three life terms for killing his wife and children in 1970. And Larry was the only reporter to travel to Japan and China to cover former Governor Jim Hunt on his first international trip to recruit foreign companies to expand into North Carolina.

In 2015, Larry retired from the anchor desk. When announcing his retirement, Larry also shared with his viewers and colleagues that he was battling ALS.

Larry told viewers that he is suffering from ALS, and that is ending his broadcasting career.

What made it especially frustrating was it robbed him of his voice, the tool he had used for his entire career.

But while he stepped away from the anchor desk, Larry took up activism. His new full-time job was fighting for awareness, research, and ultimately a cure for ALS.

To communicate, he used special computer software that created a synthetic version of his former voice.

He also volunteered to be part of a Duke study aimed at creating a device to help ALS patients paralyzed by the disease.

"If it will help somebody down the road I'm glad to do it," he said.

Larry also donated thousands of dollars to the ALS Associated and encouraged others to give and take part in fundraisers. He was part of the "Stogner Strong" team at ALS walks in Raleigh.

The cause took Larry to Washington where he had so often been as a reporter, but now he was an advocate lobbying lawmakers for better access to care and more advanced research.

He also took time to travel, play golf, and go on his daily walks at Sandy Creek Park with his dogs Beauty and Beast.

In February, on the one-year anniversary of his retirement, ABC11 honored Larry by naming our Durham studio in his honor.

ABC11 remembers the remarkable life and career of Larry Stogner.

The plaque on the door reads: "Celebrating Larry as the patriarch of the Eyewitness Newsroom and the heart of North Carolina." It finishes with Larry's signature "Thanks for the company", which is how he signed off on each newscast.

Larry is survived by his wife Bobbi, their six children, and grandchildren.