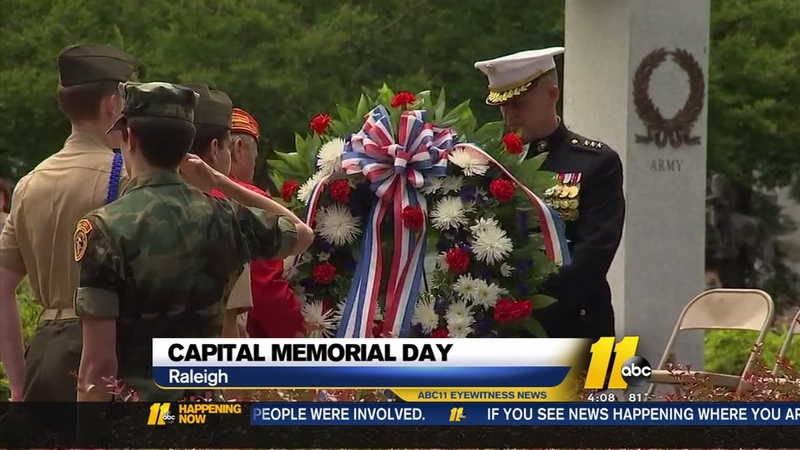 RALEIGH (WTVD) -- Several Memorial Day services were held Monday to honor all the men and women service members who have made the ultimate sacrifice to protect our country.

A wreath laying ceremony hosted by the Tar Heel Detachment, alongside the Raleigh Marine Corps Reserves and the Capital City Young Marines, was held at the capitol building.

Also in Raleigh, the historic Oakwood Cemetery will pay tribute to our fallen service members. The service was set for 4 p.m. at the Veterans' Field of Honor within the cemetery.

The keynote speaker was Dr. Charles Harr, a retired US Navy rear admiral and surgeon at WakeMed Hospital.

Memorial Day services were held locally and throughout the country

The town of Spring Lake held their Memorial Day ceremony inside due to bad weather. There was a wreath laying as well as a speech from the commander of the 82nd Airborne.

The town was expected to unveil a new permanent monument in Veteran's Park honoring Vietnam vets from Spring Lake, but the monument wasn't ready in time.

In Durham, there was a ceremony at the Maplewood Cemetery where Vietnam veteran and Purple Heart recipient Ira Mccarson gave a speech.

Flags were placed in the cemetery over the weekend.

Governor Pat McCrory ordered all U.S. and state flags be lowered to half-staff to honor our fallen members of the military.

The governor also offered his thoughts in a holiday message where he noted that the sacrifice is felt especially deep in North Carolina with such a large military population.

A Memorial Day service will be held in Raleigh on Sunday

They are raising awareness about the bravery and dedication of the Special Operations K-9 soldier. The museum's director say the dogs often lead their team members into dire conditions to save lives, and many give their lives in service to their country.