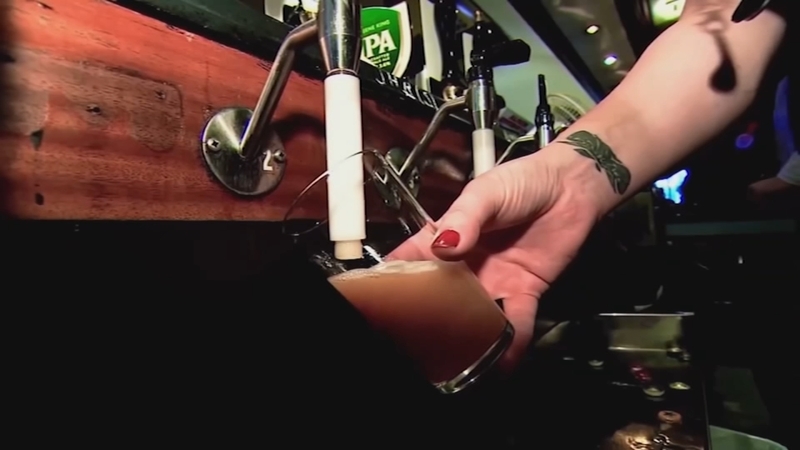 RALEIGH (WTVD) -- While the suds are flowing again at many North Carolina bars since being allowed to reopen this month under Phase 3 -- the new socially-distant bar scene isn't just different, it's difficult.

Many alcohol-only bar owners are having a tough time luring their bartenders back to a job - that currently comes with a hefty shot of economic uncertainty.

"It's a big struggle within the industry right now to find people because they're scared to go back to work," said Steven Voisey.
He and his and wife, Kristen, share more than the same last name -- they also share the same profession. They're both bartenders in downtown Raleigh.

Steven is back at work after three months of pandemic-induced unemployment. But despite Governor Roy Cooper clearing bars to reopen October 3, many of Steven and Kristen's fellow mixologists are hesitant to head back. Or if they do, they don't stay long.

"The income wasn't there," Steven said. "And their hours got reduced once they started back. So they ended up back on unemployment."

Kristen added, "A lot of people are just looking for new kind of jobs now. They're not even looking for the (bar) industry anymore because it is so wishy-washy. I've had people that have gone into construction and stuff like that because they at least know that there is work to be done."

Steven and Kristen Voisey are both bartenders in downtown Raleigh. Tonight, we talk to this husband and wife about the hesitancy of many bartenders to return to jobs that currently come with a hefty shot of uncertainty amid NC COVID-restrictions for alcohol-only bars. #abc11 pic.twitter.com/HaIDyJ67RY

Highlighting the hesitance of many bartenders to return to the uncertainty of their industry was Raleigh bar owner Zack Medford's recent post on Facebook. He wrote an open call for any bartenders looking for a job.
Medford, president of the North Carolina Bar and Tavern Association, has been an outspoken critic of the new restrictions for alcohol-only establishments - currently allowed to serve drinks outdoors-only and at 30 percent capacity.

"Why would my customers go to my bar and stand out in the cold when they can go to the brewery next door or the restaurant bar down the street and be able to enjoy those same drinks in the comfort of the building. It doesn't make any sense," Medford told ABC11 in an interview earlier this month.

While Kristen and Steven are both working at their bar/restaurants, it may become harder for employers to find bartenders as many decide to keep collecting unemployment benefits rather than take the financial risk back behind the bar.

"If you know something's coming in and you can pay your bills, it's a lot easier and safer to go that route," Steven said.