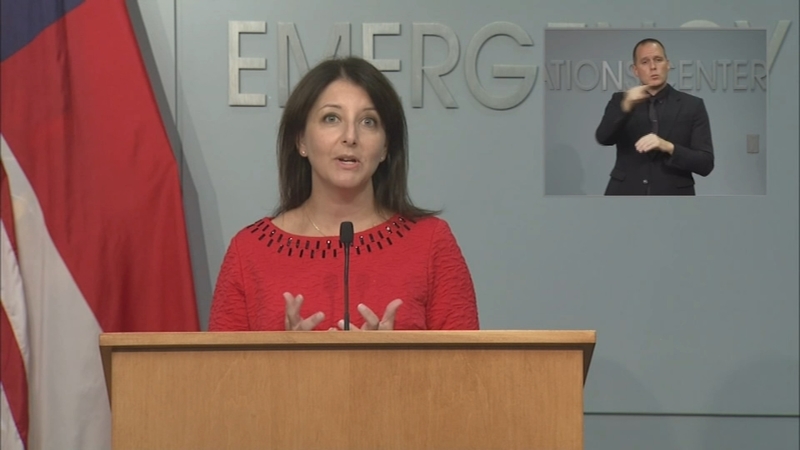 RALEIGH, N.C. (WTVD) -- In a news conference Tuesday, North Carolina Gov. Roy Cooper announced that large outdoor venues that can seat at least 10,000 people, including stadiums, would be able to open to 7% capacity starting next week.

The new order will go into effect next Friday, Oct. 2.

"When we ease restrictions, that means our efforts are working," Cooper said.

Cooper's current executive order, which instituted Phase 2.5 of his plan to reopen the state, is set to expire next Friday, October 2. Under Phase 2.5, gyms, bowling alleys, playgrounds and museums were allowed to open to the public with restrictions. More than two weeks after the state lifted those restrictions, the state has not seen an uptick in cases, emergency room visits for COVID-like symptoms, or the percentage of positive tests.

In fact, the percentage of positive tests has dropped in recent weeks, hovering between 5 and 6%, and even dipping below 5% on some days. North Carolina Department of Health and Human Services Secretary Dr. Mandy Cohen has repeatedly emphasized 5% positive tests as a goal of the state in line with guidance from the Centers for Disease Control and Prevention, but in an interview with ABC11 last week, she said that the number is a goal, not a destination.

"You can see how much hard work it has taken to get close to 5%," Cohen said last week. "It takes hard work to stay there as well."

Many central North Carolina counties have seen their percentage of positive tests stay at or below 5% for more than a week, including Wake, Durham, Orange, Johnston, Chatham and Granville counties.

The opening of outdoor venues comes as North Carolina universities begin their fall sports seasons and the Carolina Panthers begin their season. The Panthers played their home opener against the Las Vegas Raiders on Sept. 13 with an empty stadium.

We are thrilled that we will be able to start welcoming spectators back to Kenan Stadium in October and we are hopeful that the number of people allowed in our stadiums will safely increase as Fall progresses.
We will be particularly excited to have parents and students back in our stands; they were certainly missed during our season-opener. We are working with health experts and our University on plans for seating, concessions and continued communication of community standards, with the health of our student-athletes, coaches and community our top priority.

Josh Chapin spoke to some fans eager to see stadiums welcome fans back.

As outdoor venues get green light to partially open, some fans excite while others would rather wait

Jim Johnson has been a UNC ticket holder for 30 years and had three options on what to do with his tickets: donate, get a full refund or apply them to next year.
"I'm just not going to have a huge interest in being an attendee this season. I pretty much have written this season off. I think it's the prudent and appropriate thing to do," said Johnson. "We'll do it next season but there are bigger societal things going on than athletics. I love athletics but in the grand scheme of things it's not that important."

NC State graduate Robert Booker is ready to get back into Carter-Finley as soon as he can but is pleased parents of players can go back first.

"I would go if they allowed me in. I'd wear a mask or whatever they wanted me too," said Booker. "We all need to be safe. I love the attitude of Coach Doeren. I love the idea that we're playing even if not a lot of the fans can be out there. I'll get out there when they allow me."

Cooper reported his revised guidelines on the day the state revealed its COVID-19 tracking app, which will expedite and simplify the contact tracing process by alerting users whether they have been in close contact with someone who tested positive for COVID-19.

As part of his news conference, Cooper also announced a $40 million fund paid for by the CARES Act. for small businesses to help pay rent, utilities and mortgages. Businesses that would be able to apply for up to $20,000 per location include amusement parks, banquet halls that have a catering staff, bars, taverns, nightclubs, cocktail lounges, bingo parlors, bowling alleys, dance halls, gyms, indoor recreation centers, movie theatres (excluding drive-ins) and museums.

Notably, the new guidelines continue to leave out businesses such as bars, night clubs and movie theatres, which have remained closed since mid-March.

Bill Peeples, who owns the Rialto Theatre in Raleigh, said he's running out of patience.

When he is allowed to reopen, the owner of the Rialto already has safety precautions in place.

Peeples has already outfitted his theatre with social distancing markers on the sidewalk outside the building and in the lobby. He also marked off every other row of seats in the theatre. Peeples also said he would require masks for both patrons and employees, and that employees would wear gloves at all times. The safety measures come from CinemaSafe, a list of guidelines from the National Assocation of Theatre Owners.

Outside the Rialto, the marquee has been displaying quotes from famous movies during the lockdown. Some of them became critical when movie theatres weren't allowed to open earlier this month, but many backed Cooper's earlier decisions to keep businesses closed and protect public health.

"Hence, we went back to a very supportive marquee," Peeples said. "If this continues the tone of the marquee may change yet again."

Peeples said once state officials give movie theatres the green light to open, he will order fresh concessions for patrons and contact his film buyer.

"We will make a decision as soon as I havce something to work with," Peeples said. "Looking into a crystal ball does me no good."