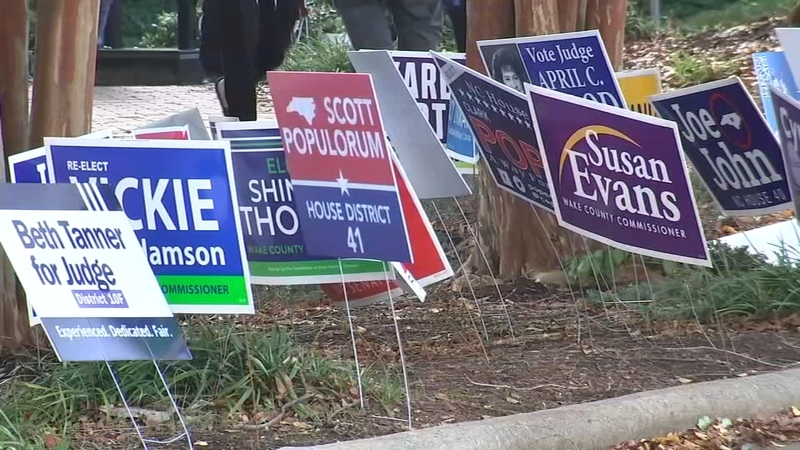 RALEIGH (WTVD) -- Herbert Young Community Center in Cary holds the distinction of being one of the busiest Early Voting site in the state, but you couldn't tell Friday. There was little to no wait throughout the day.

Traffic cones were the only thing in the parking line around lunchtime; it's a bonus for those who have been pushing off heading to the polls.

Cary resident Jill Verrastro says she would have gone sooner if she could, "My work has been really, really busy. I was worried that I might not be able to, but I went online and saw that the wait time was nothing."

The lines are certainly a lot thinner from where they were exactly two weeks ago. People were then standing in the rain and waiting for two or three hours.

Welp, this is a sight I haven’t seen!! Absolutely no #EarlyVoting line at Herbert Young Community Center as of 1pm. This site has been one of the busiest in the state. Thousands of people have already cast ballot, there’s been record-breaking turnout. #ABC11 pic.twitter.com/34alwJeDNZ

Historically, the last few days of early voting draw the biggest crowds, but this election has been unlike any other -- there's been record-breaking turnout.

The North Carolina Board of Elections reports more than 4.1 million ballots have already been cast in the state. That comes out to 56 percent of North Carolinians registered to vote.

"It's most definitely impressive," said voter Olivia Taylor. "A lot more people are voting that don't even vote and a lot more younger people.'

Folks still have an opportunity to cast a ballot in the final few hours of Early Voting.

Polls close in Wake County at 7:30 p.m. on Friday. On the last day of Early Voting, polling site hours on Saturday will be extended from the usual 8 a.m. to 3 p.m.