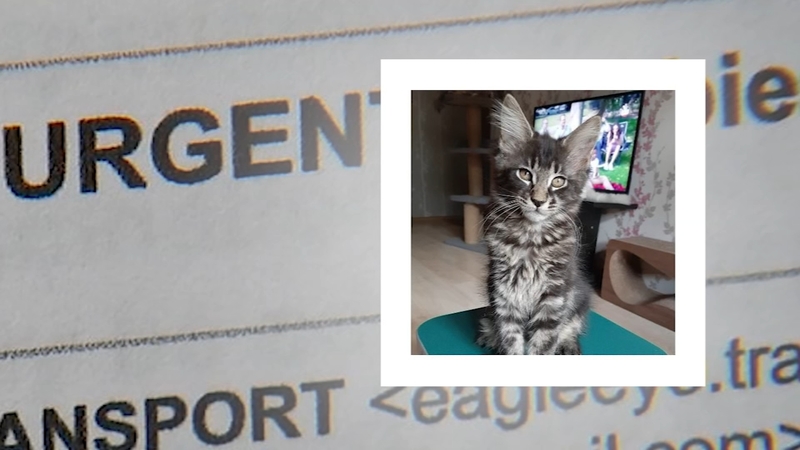 FAYETTEVILLE, N.C. (WTVD) -- The holidays are a popular time for many people to add a new pet to their family. If you're searching online for a specific breed, make sure the person or place you're working with will not just take your money.

A Fayetteville woman learned that lesson the hard way. She did not want to use her name, but she wanted to make sure others avoided going through the same emotional and financial heartache.

This woman wanted to find a Maine Coon cat to join the Maine Coon she had already in her home. She found an advertisement online for that specific breed of cat. The ad said the cat's name was Arni, so she filled out a form on the website and got an email back from the breeder rather quickly.

She got an email confirmation explaining how Arni would be flown to her and that the total cost to ship Arni to her would be $737.00. She wired that money to the breeder and waited for Arni to arrive at Fayetteville Regional Airport.

Instead of getting the news that Arni had arrived, she got a frantic email from the seller.

"When the cat was delivered on Tuesday morning to the airport all of a sudden there was an issue where the cat had to have pet insurance," she said.

She was told Arni would need pet insurance at a cost of $973.00. She wired that money and thought that would be enough, but then she got another email that stated there was now a problem with Arni's vaccinations.

Emotionally drawn to Arni, she wired hundreds of dollars more, in all sending more than $2,400 just to get Arni to Fayetteville.

Even after sending all of that money, there were still problems, and the seller claimed he needed more money, but at this point, she realized something was wrong.

"I said this is extortion. This is a scam. I just broke down and cried,"

She got in touch with Troubleshooter Diane Wilson. Wilson told her to reach out right away to the companies she wired the money through. It took some time, but she was able to get close to $1,000 back.

"It's a painful lesson, but I have really learned a lot."

Not all victims of this type of scam are lucky enough to get their money back. Typically once you wire the money, it is gone.