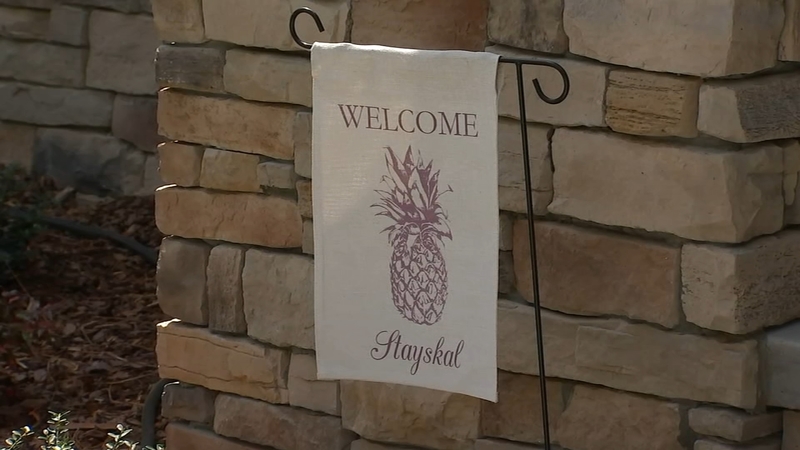 "It's awesome. It's knowing that there's a home always there for the family. This is just going to be a place where we're going to build the memories from here on out for the rest of the days," Master Sgt. Richard Stayskal said.

Sadly, the rest of those days are not guaranteed since Stayskal was diagnosed with terminal lung cancer in 2017, a diagnosis that military doctors missed.

Troubleshooter Diane Wilson first told you about Stayskal's fight after learning he had no recourse to sue. ABC11 was there when Stayskal along with his family, and attorney fought for change in Washington D.C., and lawmakers passed the Stayskal Act which allows military members, like Stayskal, to be compensated for malpractice in military facilities that are unrelated to combat.

After Stayskal's win in Washington D.C., the nonprofit, Operation Finally Home announced it would build the Stayskal's a mortgage-free home.

"Without you know people like Daniel Adams--the builder there--and the Moore County Builders Association that really rallied behind this and stuck to it, it's really just giving us and that building community the opportunity to give back in a really meaningful way," Rusty Carroll with Operation Finally Home said.

Carroll said Cushman and Wakefield was a major supporter of the project as well, along with several businesses who even provided the furniture for the home.

For Carroll, it was a relief to get the Stayskals in their new home. "We're just thankful to be in a position to bless people such as Richard and his family and just hearing his voice and hearing him say that it was the first time that he's been able to sleep in years."

While the pandemic did cause some construction delays, the Stayskals are just thankful to be settled in their new home.

"It's wonderful. I mean, the kids love it," Stayskal's wife said.

The home was built with Stayskal's future health needs in mind. It's been five years since Stayskal was diagnosed with lung cancer; he says he's hanging in there.

"Trying to live like normal I guess but the days are still hard. You know, I'm still missing part of my lung from surgery and everything else. I'm in pain every day, but I still travel once a month for treatment," he said.

But this new home relieves a huge financial burden.

"It's nice to know that the worrisome of the mortgage is not going to be there for me and the kids, and you know when the time comes, if I'm not around, it's just something that makes it just that much easier during the hard time."

While Stayskal is enjoying being in his new home with his family, he's still waiting for the Department of Defense to rule on his claim filed under the Stayskal Act.

It's been more than two years since his attorney filed a claim with the DOD for the missed lung cancer diagnosis, and while they have been told a decision is coming, they are still waiting.

"It's getting really frustrating and difficult because I thought a lot of the politics was over. They like to play this, 'We don't know what's going on,' and 'We're waiting on this person but this person can't answer,' and it just really doesn't make sense."