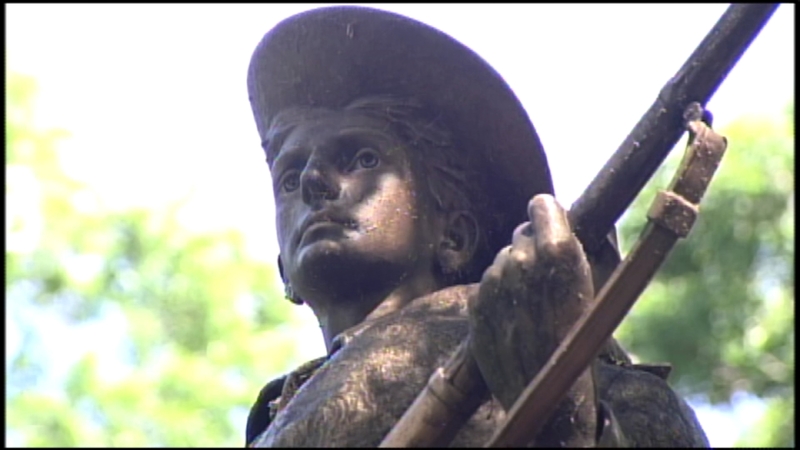 CHAPEL HILL, N.C. -- A New York-based not-for-profit foundation has withdrawn a $1.5 million grant intended for the University of North Carolina at Chapel Hill in light of a financial deal between leaders of the university system and a Confederate group to preserve a controversial statue.

Meanwhile, a national civil rights group moved forward Friday with legal action seeking to undo the settlement that would provide funds to the Confederate group to preserve the statue.

The Andrew W. Mellon Foundation said in a statement that it withdrew the grant when it learned that the UNC Board of Governors decided to allocate $2.5 million to the Sons of Confederate Veterans to endow a fund that would maintain the "Silent Sam" statue that stood on the UNC campus until protesters toppled it from its pedestal in August 2018.

The Mellon Foundation's Friday statement said the foundation had been working with the school since last spring to develop a grant proposal that would "support a campus-wide educational reckoning focusing on historical truth-telling and confronting the University's entanglements with slavery, Jim Crow segregation, and the memorialization of the Confederacy.

"Allocating university funding toward protecting a statue that glorifies the Confederacy, slavery, and white supremacy - whether from public or private sources - runs antithetical to who we are and what we believe as a foundation," the statement said.

Last month, UNC announced that the statue known as Silent Sam would be given to the Sons of Confederate Veterans, which would be banned from placing it in any of the 14 counties where UNC campuses are located. Silent Sam, dedicated in 1913 to honor UNC alumni who fought for the Confederacy, stood in a main quad of the Chapel Hill campus for more than a century before protesters pulled it to the ground last year.

The agreement calls for university officials to create a $2.5 million private fund that would be used for expenses related to preserving the monument or potentially building a facility to house it. Officials have said no state money will be used for the fund.

The deal sparked multiple protests. Faculty members on the Chapel Hill campus condemned the agreement and protesters marched against it. North Carolina's attorney general's office has distanced itself from the settlement as well.

Also, a national civil rights group warned UNC leaders on Wednesday that they should reconsider the settlement. In a letter sent to the attorney who represented the UNC Board of Governors, the Lawyers' Committee for Civil Rights Under Law urged the board "to take all necessary action to meet (its) fiduciary obligations to protect UNC's interest and to recover the $2.5 million to be paid to support a white supremacist organization whose values are antithetical to UNC's mission."

On Friday, six UNC students and one faculty member represented by the Lawyers' Committee filed a motion in Orange County court asking to intervene in as plaintiffs in the legal settlement and overturn it.