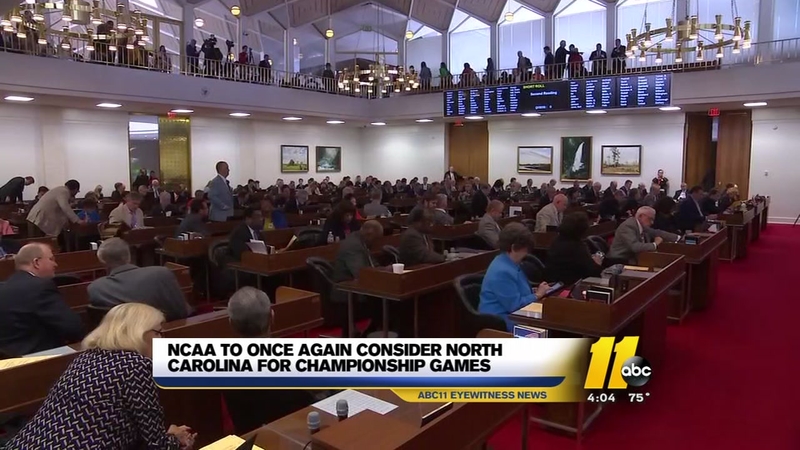 RALEIGH, North Carolina (WTVD) -- The NCAA will consider North Carolina as a host for championship events again after the state rolled back a law that limited protections for LGBT people.

The governing body said Tuesday its Board of Governors had reviewed moves to repeal the "bathroom bill" and replace it with a compromise law. The NCAA offered a lukewarm endorsement, saying the new law "meets the minimal NCAA requirements" while expressing concerns about its provisions.

The NCAA statement said a majority of the board "reluctantly voted" to allow for consideration of bids from North Carolina during current deliberations for sites running through 2022. Events for the 2017-18 season that have already been awarded to the state - such as opening-weekend men's basketball tournament games in Charlotte - will remain in place.

"We are actively determining site selections, and this new law has minimally achieved a situation where we believe NCAA championships may be conducted in a nondiscriminatory environment," the statement said. "If we find that our expectations of a discrimination-free environment are not met, we will not hesitate to take necessary action at any time."

NCAA Board of Governors’ position on HB2 Repeal: https://t.co/AawZtrZnlG

The NCAA pulled seven events from the state in September for the 2016-17 season, including men's basketball tournament games from Greensboro in March, in response to the law. Those games were moved to Greenville, South Carolina, which had been banned from hosting events for years before that was lifted following the removal of a Confederate flag from state capitol grounds in 2015.

The NCAA's North Carolina ban didn't affect teams that earn home-court advantage during the course of the season, such as the Duke women's team hosting NCAA tourney games in March.

The NCAA had made it clear that more events already awarded to the state could be relocated, while also saying it would remove North Carolina bids from consideration as it prepared to announce is next wave of site announcements.

But Gov. Roy Cooper signed the compromise bill Thursday to repeal elements of House Bill 2 after passage by the state legislature earlier in the day even while saying it wasn't a perfect solution. That came days after the NCAA had issued a statement that the state was down to its final days to get something done.

"North Carolina's new law does nothing to guarantee that LGBT people will be protected from discrimination, and as the NCAA's own statement acknowledges, the rights of trans student-athletes, coaches, and fans in particular, remain in legal limbo," said James Esseks, director of the ACLU's LGBT and HIV Project. "This is not an environment that protects people from discrimination."

The North Carolina Sports Association had estimated more than $250 million in potential economic impact from 130 event bids submitted to the NCAA.

"It is disappointing to see the NCAA backpedal after it stood strong against the deeply discriminatory HB2," Equality NC executive director Chris Sgro said in a statement. "HB142 continues the same discriminatory scheme put forward by HB2 and does little to protect the NCAA's players, employees, and fans. The NCAA's decision has put a seal of approval on state-sanctioned discrimination."

Several organizations are disappointed with the boycott's results, saying the NCAA got exactly what they wanted.

"NCAA's boycott of North Carolina achieved what it wanted-the repeal of HB2-proving that bullying works as long as you meet the demands of the bully," said North Carolina Values Coalition executive director Tami Fitzgerald. Adding, "The NCAA had no business demanding anything of North Carolina lawmakers. Nondiscrimination laws in North Carolina, even under HB2, have always been similar to 29 other states and 10,000 other multiplicities."

Governor Roy Cooper says he's still working with Equality NC and HRC but assures that the appeal was a compromise that needed to happen.

"Last week's compromise was an important step forward for our state. While more work remains to be done, it's good news that the NCAA will be returning to North Carolina. We will continue our work with them to fight for statewide antidiscrimination protections for LGBT North Carolinians."

The Atlantic Coast Conference had followed the NCAA's lead last fall, pulling 10 neutral-site events from the state, including moving the football championship game from Charlotte to Orlando, Florida.

But the ACC said Friday its Council of Presidents had voted to again consider North Carolina sites to host events. And that also ensured events already set for the state for the 2017-18 season would remain in place, meaning the football title game would return in December to Charlotte since it was contractually set to run there through 2019.

Speaking at the Final Four on Thursday, NCAA President Mark Emmert said the governing body would review the changes in hopes of reaching a quick decision by early this week.

"I'm personally very pleased that they have a bill to debate and discuss," Emmert said then. "The politics of this in North Carolina are obviously very, very difficult. But they have passed a bill now and it'll be a great opportunity for our board to sit and debate and discuss it."