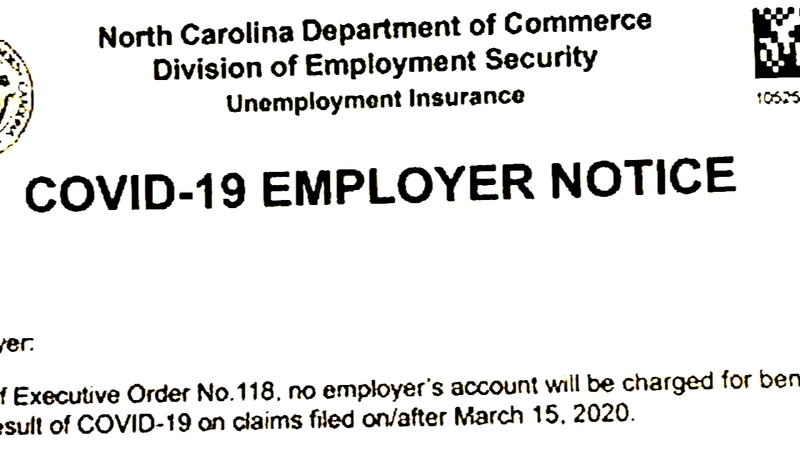 RALEIGH, N.C. (WTVD) -- More than seven months into the COVID-19 pandemic and frustrations continue to mount from the unemployed in North Carolina, many of whom have waited weeks, even months for answers when it comes to their benefits.

ABC11 Troubleshooter Diane Wilson continues to track down the money and help frustrated business owners get answers when it comes to fraudulent claims filed against their company.

"We've exhausted all of our savings, we have no money left," Nicolette Steinberg said.

SEE ALSO: US hiring slows for 3rd month but jobless rate falls to 7.9%

The Fayetteville mom filed for unemployment when the place where she worked was forced to shut down in March due to state COVID-19 restrictions. She got approved, but when her regular benefits expired in June and she filed for emergency unemployment, she ran into problems with the state's Division of Employment Security.

"Not one answer and not one penny. I had two days before my rent was due, my electricity was getting turned off today," she said. "The system, in general, is not where it should be, we have been doing this six months and I feel like it's just not OK at this point."

WATCH: North Carolina paid millions in unemployment. Now they want some of it back.

Steinberg is not alone in her wait. According to the US Department of Labor, in August in North Carolina there were 13.2% of unemployed still waiting for their first payment after 70 days of filing.

Small business owner Tom is also frustrated with DES, but for different reasons than Steinberg.

Despite never having an employee but himself, he showed ABC11 records from the state that show more than 30 people filed unemployment claims against his business. He said he called DES to dispute every claim.

"I've put in several fraud reports. I've called in, I've asked, I sent in here are the names these people haven't worked for me," Tom said.

Despite Tom's efforts to report the fraud, he says DES employees told him claims were approved.

"I looked at the portal and yes it says qualified for benefits, and I'm like OK how'd that happen? It's our tax dollars being squandered."

Wilson got in touch with DES, and a manager reached out to Tom. Tom said he was told the approval for benefits was in error and the final verification process blocked anyone from actually getting money.

When it comes to the thousands of unemployed like Steinberg with claims still pending a representative with DES says, "Despite the challenges faced during the COVID-19 pandemic, DES has had months with improved timeliness of payments, such as in March and April 2020. We continue to streamline our processes and align our resources to issue benefits in a timely manner to those who are eligible for them, while also reviewing claims carefully to prevent fraud and waste in the unemployment system."

The representative also said DES has also made significant progress in clearing a backlog of claims since announcing its plan in June to place priority on claims filed earlier in the pandemic. The effort included establishing a dedicated team of experts to focus on the oldest and most complicated claims.

As of October 1st, the state and federal claims backlog has been reduced to 2%, or approximately 27,100 claimants with a claim pending resolution.

Right after ABC11's involvement, Steinberg got great news from DES.