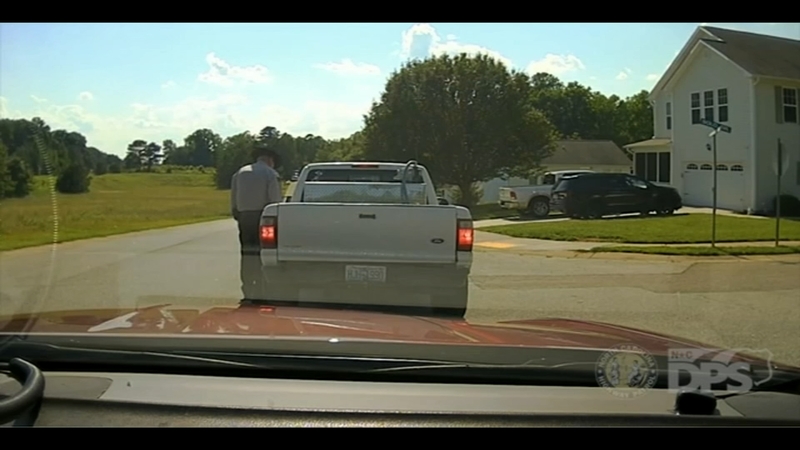 SILER CITY, N.C. (WTVD) -- The State Highway Patrol released a video of a deadly shooting during a traffic stop in Siler City.

The video shows 21-year-old Mark Anthony Diaz of Staley being pulled over by Trooper Rodney N. Cook on May 30 around 4:30 p.m.

After stopping the truck, Trooper Cook told Diaz he pulled him over because he was not wearing a seatbelt. When asked for his license and registration, Diaz said he did not have any identification on him.

Cook then tells Diaz he smells marijuana and asks him to get out.

An edited version of the video is below.
EMBED More News Videos

The State Highway Patrol released video of a deadly shooting during a traffic stop in Siler City.

It's at that point Diaz pulled out a pistol. Investigators said Cook quickly reached through the driver's side window in an attempt to deflect the gun.

Cook can then be seen on video running away from the truck, retreating back to his vehicle.

Diaz opens his door and steps out of the truck with the gun still in his hand. Cook fires one shot, hitting Diaz in the chest.

Diaz's truck starts rolling away down the hill, where it crashes into a parked car. A passenger from inside the truck hops out and runs away (investigators later said this person is a minor who is now cooperating in the investigation).

Cook approaches Diaz who is still on the ground with the gun in his hand. Cook gets the gun away from Diaz and radios for backup and EMS assistance. Cook also begins performing life-saving measures on Diaz.

Cook was not hurt during the traffic stop. He was placed on administrative leave pending an internal investigation which is agency protocol.

Tyler Paige is Diaz's best friend. He saw the video on Tuesday and criticized how Cook handled the interaction.

"Mark wasn't aggressive and cared about others. If they truly think it's justified then so be it. I know I'm ready to fight this in court," Paige said. "Rodney Cook deserves to be fired."

"For me, I feel like Mark was probably nervous and he probably panicked and he just made the wrong move at the time," Taylor said. "And sometimes, one wrong decision can end your life. But that wasn't who Mark was. Mark didn't even fight."

Diaz's demeanor is what loved ones know best, and not something they want to be misunderstood, according to Taylor.

"You know nothing about, it could easily just as be you, as it was him," Taylor said. "So just, tread lightly because life is short, and there's been so much death around the world in this past week alone. At this point, it's just like who's next? Really? So I just...long live Mark."