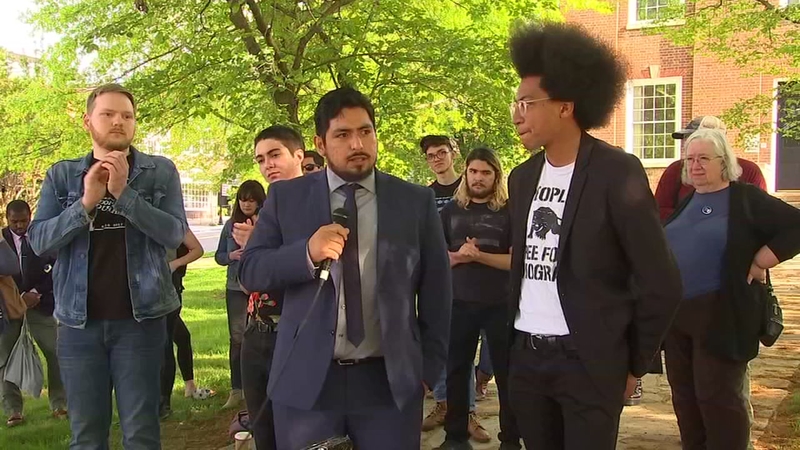 CHAPEL HILL, N.C. (WTVD) -- A judge has ordered two protesters to jail for tearing down the Silent Sam Confederate statue back in August while dismissing charges against two others Thursday.
.

Attorneys and the judge spent most of the day looking at video taken the night that the Confederate statue was toppled, trying to identify the defendants.

The judge couldn't point out Fuller and Aucoin and dismissed charges against them.

He found Jiminez and Birchfield-Finn guilty of damaging property, rioting, and disorderly conduct.

They were sentenced to 24 hours in jail plus probation.

For Birchfield-Finn, more legal issues await. He was arrested upon arrival for the trial after Orange County Sheriff's deputies said he came to court with a knife.

He was charged with possession of a weapon on state property/courthouse grounds.

Birchfield-Finn, who has a Chapel Hill address, was entering the courthouse for the trial related to his arrest eight months ago.

As Birchfield-Finn entered the building, he passed several signs advising weapons are not allowed in the courthouse, deputies said. He then removed items from his pockets and put them in the bowl prior to walking through the metal detector. As he passed through the machine, the metal detector went off. Deputies conducted a search and found a 3-inch Buck pocket knife that Birchfield-Finn had not removed from his pocket when he removed the other items.

He was taken before the magistrate and released on a written promise.

His court date for this new charge will be May 2. The knife is being held as evidence.

Just moments before the four entered the Orange County courtroom, the defendants doubled down on their moral stance.

Jiminez along with Birchfield-Finn, Jonathan Fuller, and Lauren Aucoin are on trial because of their alleged involvement in the toppling of the Silent Sam statue in August of last year.

"They tell us that Confederate monuments commemorate history. Silent Sam and all the monuments for white supremacy not only acknowledge white America but glorify it," Aucoin said.
A UNC police officer who was there when the statue fell testified in the case.

"Some of the protesters threw smoke bombs. I witnessed one of my coworkers get punched," he said.

The Silent Sam statue -- including the base and signage--were removed from McCorkle Place in January. Its removal was the last major decision from former Chancellor Carol Folt who announced she was stepping down at the same time.

Since then, the statue remains in storage. No final decision has been made as to where it will stand next.