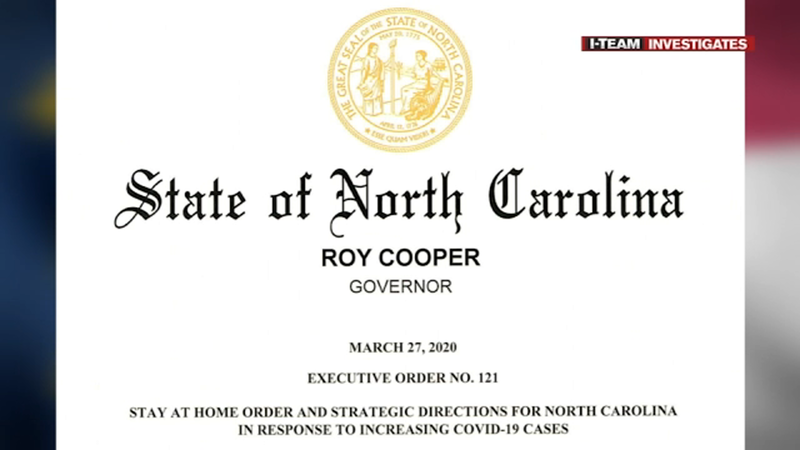 How many executive order violations led to citations in NC? Not many

RALEIGH, N.C. (WTVD) -- At least one party was shut down as recently as New Year's Eve, but an ABC11 I-Team investigation finds a much more limited list of citations for violations of Governor Roy Cooper's COVID19-related Executive Orders.

Governor Cooper first declared a State of Emergency for the pandemic on March 10, and would exercise those emergency powers more than 60 more times (the latest order was signed March 1, 2021).

"It's what we have to do to save lives," Cooper said on March 25, 2020, just two days before his first Stay-At-Home order would take effect. "It has the force of law."

Wearing seatbelts, access to lifejackets, prohibiting driving under the influence - those are also rules that have the force of law, and maybe with time the mask mandates and capacity restrictions will be seen in less divisive manners.

Still, a review of call logs and arrest records show either a concerted effort among all North Carolinians to actually follow these rules or a reflection of law enforcement's desire to use enforcement as more of a last resort.

According to the Raleigh Police Department, more than 700 caller complaints about EO violations led to just five citations; in Wake County, the sheriff reported just one ticket among 225 complaints since March 2020.

In Durham, there's been just one citation between both the DPD and DCSO.

"From the beginning of this pandemic, the Governor took decisive action to keep people safe and save lives, and North Carolina has not seen the surge in cases that overwhelmed other states," a spokeswoman for Governor Cooper told ABC11 in a statement responding to our I-Team report. "The Governor is grateful for the many North Carolinians who have stayed committed to wearing a mask and being responsible and he urges people to continue these efforts until the vaccine is widely available."

Not everyone got off easy: Seven bars in Raleigh's Glenwood South district almost lost their liquor licenses for opening when they weren't supposed to, while another bar in Raleigh was found in violation only after police were called to a shooting.

In Edgecombe County, police arrested one man for hosting a party for more than 70 people; ABC11 cameras were rolling in Roxboro last spring when police shut down a salon.

The most high profile, case, however, might be in Alamance County where the state took Ace Speedway to court - and won - after the venue hosted more than 1,000 fans for an event.